This is not an Aesop fable, but one of the ironies about Fox News Channel is that it is utterly without redeeming merit if you want political information, but I have to hand it them -- when it comes to natural or manmade disaster, Fox is the channel of choice for news that is breaking, literally. 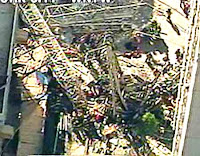 Like this morning's crane collapse. This was further confirmation that when something unexpected happens, Fox has the resources, the network of local affiliates and the high volume of "citizen-journalists" (viewers) to provide more detail, better pictures and faster delivery of news. Of course, crane collapses, plane crashes, earthquakes and the like, don't have political content, so the Fox producers and reporters are free to actually cover the news as it happens.


There's Something About Hillary

Now that the race for the Democratic nomination is over, except for shoveling dirt on the carcass of Hillary Clinton's campaign, let it be said that only two things mattered, neither of them having to do with anything that happened during this arduous campaign.

First, she voted wrong on Iraq and refused to apologize.

Had Hillary been nominated and elected to two terms, there would have been a Bush or a Clinton in the White House (or as vice president) for 36 consecutive years. If only 36 years were the term in prison instead of the term in office for some members of these scandalous families!


A Question for Memorial Day Week

In reference to John McCain, what is so heroic about flying a jet fighter, raining death upon civilians you don't even see or being unskilled enough to get shot down and imprisoned. Recall that George Herbert Walker Bush was shot down once and crashed another plane during his wartime service and he was rewarded with the presidency.

People could argue endlessly about the definition of heroism (Hemingway's "grace under pressure" comes to mind), but I never comprehend why killing civilians in an unnecessary war -- be it McCain, John Kerry or the thousands of Iraq War veterans --
constitutes heroism. In all three cases, the "heroes" signed up to do a job, and in McCain's case, this Naval Academy screw-up did his most important job up till now not so well.

In addition, according to a New York Times mini-biography, McCain violated military chain of command when he was posted as Navy liaison to the U.S. Senate and undermined Carter administration policy.

What is "Navy liaison" to the Senate? Make up your own mind from the Times account, but apparently the job entails procuring liquor and whores for traveling senators. That McCain met his third wife in a bar and that her family made millions distributing Budweiser in the desert speaks for itself.
Posted by Ira