I’ve been having some difficulty stealing for this blog newspaper photos of the brand new baseball stadium in Washington, built with $611 million of taxpayers’ money. Which is fine with me since I pay taxes across the boundary in Maryland. For some reason, it is impossible to export the newspaper photograph to my various photo software and not have it come out with pixels the size of Andre the Giant’s head.

The big selling point of what is, on its own, a beautiful stadium with tremendous sight lines to the field of play, is that it would provide a view of the Washington Monument and the Capitol. It does, oddly enough, but only from the cheap seats high in the upper deck. And it does if it is not cloudy outside. The view from the better seats looking out to the open spaces of the city is more prosaic -- a parking garage and two monstrous office/apartment complexes. One the other side of the stadium is this view of the neighborhood. 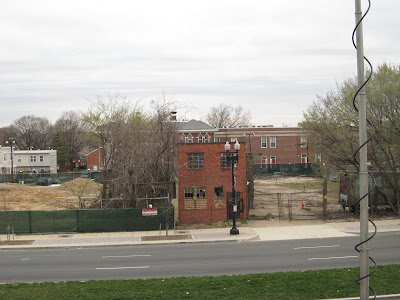 Anyway, some of us go to a game for the game itself, and this one was classic. It ended with a 9th-inning homerun by the most popular player on the team, Ryan Zimmerman. I had my new camera with me, but being a scribe and not a shutterbug. I basically missed the triumphal trot around the bases by Zimmerman and the bedlam awaiting him at home plate. The reason was that I had forgotten to change a previous setting from “movies.” By the time I got straight, I tried for a shot of the gigantic digital scoreboard, and this is the best of what I got. But it does give a sense of what the stadium looks like from, well, not the cheap seats. 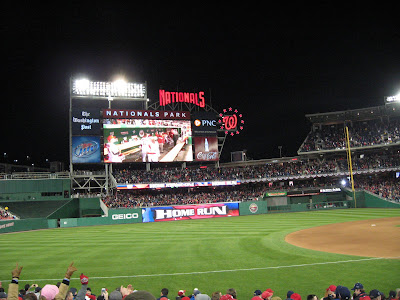 Other people go to the game for the food, and since this is a brand new venue for selling $4.50 hotdogs and $7.50 beer, not to mention more expensive half smokes, chili macs and chicken tenders with fries, the delicacies were considered ripe enough to be the cover story on today’s Washington Post weekly food section.

I prefer to eat early, before the game starts, as depicted in this photograph of me (tan parka and blue cap in dead center of the picture) eyeing the cheaper chicken at the stand next to the over-rated Ben’s Chili Bowl half smokes. (How I was able to steal this one, I don’t know, but to fully see it, click here.)