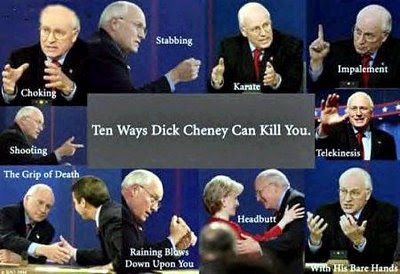 Maybe you missed it, but during an interview last week, Vice President Dick Cheney was reminded by Martha Raddatz of ABC News that most of the American public strongly opposes the U.S. role in Iraq.

Cheney’s instant and visceral response was, “So?”

It may go down as the most revealing statement in history’s assessment of the Bush Administration.

Until history is written, however, here is a column in the Washington Post, by Mickey Edwards, a very conservative former congressman from Oklahoma about his old colleague, Mr. Cheney of Wyoming.

Today, the 4,000th American service person was killed in what President Bush declared was a “mission accomplished” on May 1, 2003.
Posted by Ira