In 1980, Democrats were dazed when they unexpectedly lost a dozen seats and turned the Senate over to the Republicans. That’s when a rock was turned over and light shone on a little known political action committee that, supposedly operating independently of the Republican party, launched expensive, sub rosa personal attack ads against stalwarts of American public policy – Bayh, McGovern, Church, Magnuson, Nelson. Gone. On the Republican side, Jacob Javits ousted in a vicious primary campaign.

Behind the massacre was this “National Conservative Political Action Committee,” the brainchild of extremists and the Christian Right, co-founded by an operative named Terry Dolan. He isn’t still with us because this avenging warrior of family values died at a young age only six years later. Of AIDS. He described his tactics as “gut-cutting” and declared, “We are trying to be divisive. … The shriller you are, the better it is to make money.” He also said, “A group like ours could lie through its teeth, and the candidate it helps stays clean.”

I bring this up because what was called NCPAC (“Nickpack”) – now just CPAC -- set the bar so low for political dialogue that even the president looked like a saint when he addressed the group on Friday. NCPAC, once a family embarrassment, is now the patriarchy of the Republican party.

It may be a form of masochism, but I was strangely attracted to this event, listening to and later reading the Bush speech in full. Obviously, in a political forum friendly to a politician, the speaker is not expected to conduct a discourse on the details of governing. It is an opportunity pols of every party and stripe take. It is called “giving ‘em raw meat.” 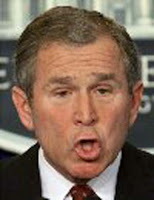 So, I take no issue here with Bush’s defense of the economic, military and moral successes of his administration, which have lifted him to a 30 percent approval rate. What I want to point out is the low quality of his rhetoric and argumentation.

In a 45-minute speech he was interrupted by applause 85 times and 31 times he set up straw men and proceeded to demolish them with red herrings.

We believe our nation has the right to defend itself -- even if sometimes others disagree.

It would have been nice if he had the courage in defending our freedom to name someone who does not believe our nation has the right to defend itself. Speaking of these same people:

They tend to think has the answers to our problems. They tend to believe our country only succeeds. They tend to be suspicious of 's exercise of global leadership -- unless, of course, we get a permission slip from international organizations.

This must be a reference to the UN, which Bush boasted having asked permission of.

Our critics … believed that the best way to keep the economy -- to help the economy was to keep taxes in and expand the size and scope of the federal government. … (O)ne columnist said this, "Tax cuts -- any tax cuts -- are the wrong way to go."

Hey, differences of opinion are great. But there’s no serious economist who can find any evidence that tax cuts work as intended, and the columnist in question is the former finance editor of that noted left-wing broadsheet called “Business Week.”

Yet if they have their way, 116 million American taxpayers would see their taxes rise by an average of $1,800.

One side says we should confirm judges who believe in the "living Constitution" -- which basically means they can make up laws as they go along.

For an example of judges making up laws as they along, see Bush v. Gore, 2000 and reaction to it.

At least when Mike Huckabee delivers raw meat to the Christians -- instead of the lions -- his lines are clever and he seems to actually believe them.

Well, to cleanse myself from thinking about what you see above, I voted on Saturday, in advance of the primary election in on Tuesday. In a wry oxymoron, I voted “absentee in person,” by showing up at the election board and filling out a paper ballot. The reason is because on Tuesday, I will be spending 15 hours inside a polling place as an election judge for my party.

One would think you could take a break, have another judge give you the electronic voting card and then vote. But this year, my county says other voters get suspicious when they see the election judges – who have control over the cards and the keys to the voting machine – actually voting! I don’t know why they should suspect chicanery on the part of us honest citizen volunteers when they can see the name DIEBOLD on the voting machines themselves.

Seriously, I have been on a two-day high about participating in ensuring the right of people to an honest election.

At the end of my training session on Friday, I raised my right hand and swore an oath “to preserve, protect and defend the Constitution of the .” It may be the first time I have said those words. I mean when I was asked upon registering for the draft in 1966 whether I believed in the overthrow of the by force or violence, I replied, “force.”

One interesting thing I learned is that at least in my county, everyone who enters the polling place is entitled to cast a vote. It might not be counted, however. But everyone can vote on Tuesday. If there is a question about the voter’s credentials, we give them a “provisional ballot” and let the elections board decide later. But we don't stop people from voting.

My prediction is that in my precinct and county, it will be close between Obama and Clinton. That’s because many of us wine and cheese liberals like Obama but also because has raised much more money in my neighborhood – being home to those who served in the first two administrations. Overall, I think Obama will win and D.C., and give a good run for her money in defense-oriented .

When I first became aware of politics, during the 1960 presidential campaign, I assumed the natural progression of things was to go from the Senate – the “upper house” where all domestic and international issues were resolved through splendid oratory -- to the White House.

(I would go visit the chamber in the early ‘60s and once heard a fascinating debate on making the marigold the national flower. Actually it was more of a soliloquy by Sen. Everett M. Dirksen, who gave to history the perfect description of federal budget-making: “A billion here, a billion there and pretty soon you’re talking about real money.”)

Since then, I have been disabused of many notions about politics and government, and one of them is that senators don’t get elected president. Governors, or others, do. Only Warren G. Harding in 1920 and John F. Kennedy in 1960 went directly from the Senate to the White House.

This year, a third senator will make that trip.