Today is Thanksgiving in the United States, perhaps the best holiday of all because (except for a few stubborn Native Americans), everyone can celebrate the same thing in the same manner no matter their race, religion or party.

Plus, nobody has to "do" anything like go to church, give gifts or dress up. The only negative part is that families, even more so than at Christmas, feel the need to gather together* and pig out, make judgments about one another and give thanks for not having to do this again for another year.

As for me, I am thankful that in only 424 more days, the gang of war criminals who wretchedly seized power on Dec. 12, 2000, will slink out of town with pardons, the blood of hundreds of thousands on their hands and, in one case, protected for life by the Secret Service.

Not a week goes by without some account of constitutional treachery being revealed, these days by former members of the administration. Scott McClellan, whose tantalizing excerpt from a book not due till next April, implicates the president and vice president in a criminal conspiracy.

A new book by former Assistant Attorney General Jack L. Goldsmith, whose job was to make the legal decisions in support of or opposition to the president’s proposed policies on fighting terrorism. Needless to say, after Goldsmith started saying certain things were wrong, he was no longer employed by the administration.

A review of his book by constitutional law professor and former national security adviser to the Just Department Neal Katyal summarizes a situation in which people you have never heard of (John Yoo and David Addington) arrogated to themselves powers in the name of the president that had no basis in law or practice but were the crypto-fascist realizations of their radical right-wing academic theories. 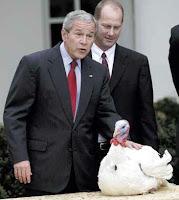 Acting as a five-member “war council,” they issued secret opinions – secret from other administration lawyers, the secretary of state, the president’s national security adviser and even from their boss, the attorney general – “that asserted that the executive could legally ignore a variety of federal laws,” reviewer Katyal writes. “ … (T)hese opinions were essentially a license for the president and his administration to break the law without reprisal. These were cavalier advance pardons, and nobody was supposed to find out about them.”

The other day, the president ceremonially pardoned two turkeys so they would not be destroyed in November. The Lawbreaker-in-Chief must be hoping they return the favor.

We gather together to ask the Bush blessing;
He chastens and hastens His will to make known.
The wicked oppressing now cease from distressing.
Sing praises to His Name; He forgets not His own.

Beside us to guide us, our Bush with us joining,
Ordaining, maintaining His kingdom divine;
So from the beginning the fight we were winning;
Thou, Bush, were at our side, all glory be Thine!

We all do extol Thee, Thou Leader triumphant,
And pray that Thou still our Defender will be.
Let Thy congregation escape tribulation;
Thy Name be ever praised! O Bush, make us free!