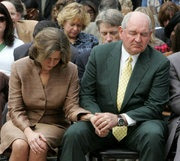 I can think of Sonny Bono, Sonny Tufts and Sonny Corleone off hand, and none of them inspire much confidence.

Which brings me to Sonny Perdue, the governor of , who today held a state-sponsored prayer vigil at the state capitol to pray for rain. Georgians, apparently, are running out of water long after they ran out of common sense and began elected nincompoops to statewide office over a century ago.

Apart from the fact that using state property to hold a religious service is unconstitutional and an affront to Georgians who pay taxes but don’t pay allegiance to Sonnyboy’s version of religion, it is bad faith.

It doesn’t take a Georgian to figure this out:

If there is a God, he/she knows there is a drought in and he/she did it on purpose. Sonnyboy has the same mentality of recently deposed Louisiana Gov. Kathleen Blanco, who when faced with the prospect of a killer hurricane aiming at her state, went on TV to urge her constituents to pray that the hurricane turn its course. What? To another state, maybe. But apparently people in and prayed better than she did.

When Sonnyboy Perdue prayed for God to make it rain in Georgia, did it occur to him that rain in one place means no rain somewhere else?

Perdue, the "Deliverance" banjoboy in a suit, must believe in the maxim that it rains on the just and the unjust alike. But only the just get wet because the unjust have stolen the umbrellas.

Anyway, if there is a just God, there would be no Georgia at all, and only partly Sonny.