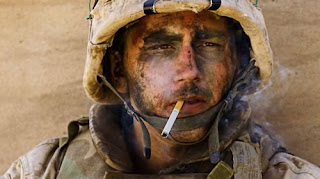 President Bush spent the official holiday of Veteran’s Day at his ranch in , letting his vice do the ceremonial wreath-laying at the Tomb of the Unknown Soldier near .

In my previous job, I learned from reading early academic studies that veterans of the Iraq/Afghanistan wars had much higher rates of post-traumatic stress disorder than did veterans of previous wars. It could well be that the PTSD syndrome is better understood now and thus more documented, but there is now a national scandal growing around the domestic effects of this foreign exercise of W’s manhood.

No further comment is needed beyond the two-part series in the Los Angeles Times about the lasting icon of this war – the Marlboro Marine – and how the government treated him.

(Part two of the series)