I have been reading a lot lately about a character I didn’t know much about, and about whom I now mortally fear.

His name is Rudy Giuliani, and he is a perfect Republican presidential nominee – if you liked Nixon and W. 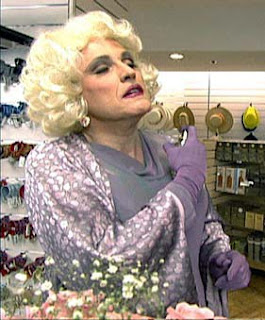 He is counting on his ability to win a general election against Hillary Clinton based on his performance on 9/11, and on his liberal-moderate views on social issues. I don’t really see the rest of American allowing a presidential contest to be between two obnoxious New Yorkers.and refereed by Rupert Murdoch. But I’ve been wrong before. Just never in doubt.

I have to hand it to him: On 9/11 he was there on the ground looking like a leader while President Bush was fleeing like the deserting war coward he was 30 years earlier. But he failed to prevent the carnage beforehand, mishandled the aftermath and slinked away from a spot on the 9/11 Commission in order to feather his own fetid nest. Now, the cochair of that commission has endorsed not Rudy Giuliani, but John McCain.

His appeal is that he sounds street-tough and claims to have cleaned up New York City like he will clean up Muslim fanatics.

The data are in on this soi-disant superman. Forget the normal give-and-take of campaign rhetoric and posturing. He is a disaster and would complete Bush’s utter demolition of American value of peace, liberty and justice.

The particulars can be found here here and here.

In short, Rudy Giuliani is a New York version of George W. Bush and much smarter, which makes him that much more dangerous.

• He is the son of a Mafia-associated hood who served time in Sing Sing, and he keeps elements of that world close to him.

• The thing he calls “loyalty” led him to promote his driver to the head of corrections and then chief of police of New York City despite his manifest corruption and then had the chutzpah to recommend this Bernard Kerik character to be head of the federal Department of Homeland Security.

• He used his fame to set up a security company (with no requirement for public accountability) that trades on his name to offer “protection” to corporations or foreign governments, raking in millions for that function and millions more in speaking fees for himself. One of his employees is a former priest who it has been said, though not proved in a court of law, had a certain fondness for young male acolytes.

• He claims credit for being the 9/11 savior taking the helm at the command center, which he stupidly placed in the World Trade Center to begin with. He then started taking credit for appearances at Ground Zero that he never made and alienated many of the first-responders he presumably represents.

• He bullied subordinates, professional civil servants, judges who tried to limit his power grabs and finally his constituents, especially minorities whose deaths he seemed to revel in. When confronted by a politician, reporter or just plain citizen who expresses disagreement, Giuliani’s modus operandi is to crush the opponent.

• He is bought and paid for by the Fox News Channel and its boss, Roger Ailes. Ailes was a Nixon hatchetman whose marriage was performed by Mayor Giuliani.

• His Catholic education, which has made other people sensitive to social conditions and provided an intellectual defense of both God and democracy, gave Giuliani a perverse lust for authoritarianism in which control is paramount to and a precursor of freedom – freedom to do things as prescribed from above. Namely, himself.

• His understanding of civil liberties defines him as an enemy of that very freedom, and his proposal to cancel the election that was to install his successor calls into question his fitness to be an American citizen, much less president.

I have called Bush a Hitler here before, and to extend the metaphor, Giuliani is a would-be Mussolini.

Ah, but you say, what about Hillary Clinton? Isn’t she as equally paranoid, bullying, punitive, secretive and authoritarian? Yep. They are a great match – for a “Crossfire” program in Hades, not for leading a staggering nation back to prominence.
Posted by Ira