In 1984, we had a Big Chill party to celebrate 15 years out of college. This past weekend, it was an informal very small high school reunion for those born in the Chinese Year of Pig (’47-’48). It was hosted by a prosperous semi-retired jewel dealer who goes by his first initial and middle name. That initial initial is S, and I think it stands for suave.

He invited a number of people to his two-acre spread an hour outside New York City. It is an airy, ceiling-fanned house on a lot in the Catskill foothills amid green grass, bright human-planted foliage and a natural haven for yellow finches and red cardinals, a heated outdoor pool, an elevated deck, a hammock and a wine cellar with bottles so big there exists no name longer than Nebuchadnezzar to define them. Our host and his bride prepared excellent food for a grilled Saturday lunch; a sit-down supper from 9 p।m. to midnight consisting of finely prepared salmon, chicken, potatoes and salads and oh, so much wine; and Sunday brunch of lox, whitefish, sable and scrambled eggs. 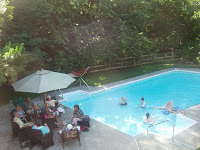 But it wasn’t the weather or the understated country elegance of the surroundings that made this weekend so remarkable. It was the company. For first time in quite a while I was not the best or the brightest, nor the smartest, quickest, wittiest, savviest wordly wise smartass in a social group. And I loved it!

Our school alumni hold the usual quintennial and decennial reunions, but this 42d reunion was put together by our host who meticulously planned it to be informal. There were 15 people in attendance – nine members of the class and, in 21st Century terms, six “spouses or equivalents,” even though the six were, in fact, married to them that brung ‘em.

These nine constituted less than 1 percent of the ginormous Montgomery Blair High School Class of ’65, but they did reflect a cohort, a neighborhood and a time of intellectual insurgence, personified by the academically gifted football player who, from his accustomed spot on the bench, won a game in what went on to be an undefeated season by suggesting a counterintuitive play to the coach. Bob, we shall call him (because that’s his name), later explained under the influence of a really good red wine the decades-long mystery as to how he could have been the school’s Woody Guthrie explicator at the same time he was an ardent Goldwaterite. “I’m an anarchist,” he proclaimed.

Bob was an insightful and humorous writer for the Washington Post Magazine and author of books, notably a history of Washington, D.C. Now he lives in a self-built cabin on an island in the St. Lawrence River, operates a Web site devoted to beavers, grows vegetables and looks happier and younger than the rest of us.

Only two of the nine were in the profession they knew they were going into upon graduation from high school, and one of those is a jazz musician who has and never will have made money given the low regard in which that genre is held but who is wealthy in reputation and in the gift of passion he gave middle school students to whom he taught music. The other is an exceptional appellate litigator who chose to work for the federal government instead of a law firm. And of the nine, no more than any three were close friends of one another because high school relationships were built around neighborhoods, homerooms, assignments to different classes and the alphabet.

The result of this perfect number of 15 - including some fairly accomplished “equivalents” in their own right - was a constantly shifting set of dyads, triads and quadriads sharing stories, insights, knowledge, jokes and arguments.

It’s really all right to look back, as long as you don't stare. So we talked some about our kids – the Ivy League brothers who are a teacher and an avant garde musician and playright, an engineering student at Carnegie Mellon, an actual rocket scientist/engineer, a psychiatric social worker; a lawyer; a journalist and then some. And, given our refusal to act according to social norms, only one of us near- or actual-60-year-olds has a grandchild. That we know of.

Those who know me know that two words absent from my vocabulary are “happy” and “fun.” In fact, I have a daughter genetically similar in this regard who went to a college whose informal motto is: “University of Chicago: Where Fun Goes to Die.”

I can’t usefully define “happiness” or “fun,” and my core self constantly reminds my outer self that having fun is socially unproductive and likely to cause pain later.

This past weekend, however, I felt as close to happiness and fun as I have since Nixon entered Hell.
Posted by Ira