Thoughts on Being a Loser

.... In honor of today’s Mexican holiday, I put extra mayo on four sandwiches and an order of cole slaw.

.... I think the Kentucky Derby is like a typical National Basketball Association game. It is worth tuning in only for the last two minutes. The difference between the two is the NBA contestants require more grass.

“Loser” is the affectionate term given to people who enter the Washington Post’s weekly “Style Invitational” contest. Today was the Losers’ annual “Flushie Awards,” and I won twice. 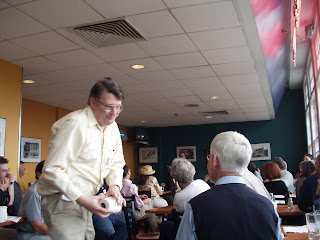 First, a roll of toilet paper with my name written on the outside, for having had my best year in terms of “inks,” the number of times winning, placing or receiving an honorable mention for witty entries.

Second, an actual plaque given to the person who has improved the most in one year. I went from six placements to 28. (A rational mind will tell you that if you start entering a contest like this at the end of the year, and if you have too much time on your hands the next year, the award is a snap.)

These ARE rational minds. Too rational. They are the minds of government officials, lawyers, Jeopardy contestants, librarians and others who you would not likely find tailgating at a football game. 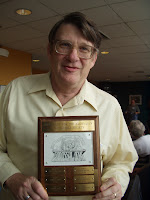 The event was so informal, there was no opportunity to make appropriate remarks, so here is the speech I would have given:

First of all, I object to the timing of this event on an afternoon when the Washington Nationals are playing the Chicago Cubs – which should be a Losers’ national holiday. But I came here because you hate me, you really hate me!

After attending two Loser Christmas parties, people would ask what you guys are like, and I confess I told them that these Losers are not very nice, fairly nerdy and incredibly self-important. At which point, my lovely wife would tell our friends that I finally had found a worthy peer group.

What has made me a perfect Loser, I think, is that I was considered by my parents to be a prodigy because I could read at age 4 and later skipped a grade. So, to this day, whenever someone asks me how old I am, I proudly report, “I am 59, but I read at a 63-year-old level.”