A Gay Old Time With the Queen 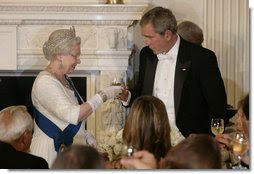 A State Dinner at the White House is a pretty good invitation to get (I would have had one except I think I pissed Nancy Reagan off at some point), and a ducat to join Elizabeth Alexandra Mary Battenberg for supper is the ne plus ultra of summonses. (How do you like that salad oil of Italian and French clichés?)

The guest list put together by Laura Bush – the sole arbiter of such things – included the usual gaggle of government officials, celebrities and press. Yes, each State Dinner – and Bush has had just about the fewest of anyone – includes members of the White House press corps. Tonight’s insiders were NBC’s David Gregory, who most observers might have pegged as the most anti-Bush of the press regulars but who really is sucking up to be either the next Tom Brokaw or Johnny Carson, and the straight-arrow wire service guy Steve Holland of Reuters, which is a British company.

Other media types rewarded with an invitation were Robin Roberts of ABC, who I believe began her career in sports, which made her a natural for producing softball interviews of the First Lady, and Elizabeth Hasselbeck, the nincompoop blonde (do I repeat myself?) who argues the conservative view on “The View” and who always loses. Her husband, Tim, is a loser, too, having had a record of 1-7 as the Redskins quarterback a few years ago.

Other guests of interest were White House Chief of Staff Josh Bolten and National Security Adviser Stephen Hadley each of whom brought their mothers as a date. Bolten, who is in his 50s, has never married. Hadley might have been merely giving a Mother’s Day present, since he has been to State Dinners before, presumably with his wife.

Among the personal friends of Bush were people named Hunt, Bass and Pickens, and the elderly widow of Walter Annenberg, who made his fortune publishing the Daily Racing Form. These names are in the Hall of Fame of corporate rapacity, if not crime. These are the personal friends of the cowboy. Oh, Mrs. Annenberg – former chief of protocol andneeded a male escort. So Rep. David Dreier of California was asked to do the honors. Mr. Drier is widely believed to be gay, also.

So that’s at least two closeted gay Republicans at the State Dinner for the queen of queens. At least Dick Cheney invited his straight daughter to the affair. And Condolezza Rice brought her regular beard, Gene Washington, a former pro football player who is now an executive with the NFL, which Rice has said she always wanted to head.

Back to the Texas pals. Ray Lee Hunt (inspiration for J.R. Ewing), head of the oil company bearing his name, is at least a three-billionaire, and one of 14 children of the nativist neo-fascist H.L. Hunt. His mother was his father’s mistress. Also invited was his son, Hunter L. Hunt, who seems destined to follow in the family bidness. His late uncle, Bunker, was convicted in a swindle designed to corner the world’s silver market.

Sid Bass and his son, Lee, are slightly less billion-laden, but also are part of the Texas oil mafia that seems to have inordinate influence on American Middle East policy. T. Boone Pickens, whose name is usually preceded by the sobriquets “corporate raider” or “greenmailer” also attended the dinner. The Hunts, the Basses and Pickens run the oil industry and have been Bush family friends forever. But even they couldn’t keep W. from losing his shirt in the bidness. They then helped him raise enough of an ante to buy part of a baseball team that yielded W. millions when he sold it – the value having been raised by a new stadium that some Texans had their taxes raised to pay for.

Yet another guest was Herbert Kohler Jr., scion of the right-wing union-busting toilet empire. And how could I have forgotten Texas buddy Richard Kinder, who used to be president of -- Enron!

Hey, this country was descended from royalty, and King George can have as his friends anyone he wants. And State Dinners don’t have to be an exercise in diversity. But you do know a man by the company he keeps.
Posted by Ira