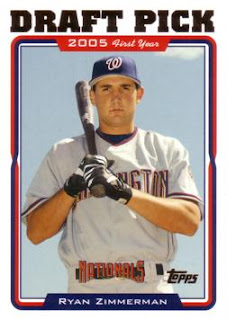 The Washington Nationals stink. They are just about dead last in every positive statistical category and among the top in every negative category.

But here is something to think about. They lead the major leagues in people named Ryan, which was only the 14th most popular boy's name in the 1980s and 25th in the 1970s -- decades in which most current major leaguers were born.

There are only 14 other active first-named Ryans in MLB and only the Cubs, Phillies and Royals have as many as two. This suggests Ryans are associated with bad baseball, even Nolan Ryan, whose lifetime winning percentage was a mere .526

Only Zimmerman, in my opinion, has any chance of being really good. Church is playing decently, but he probably will be traded for two reasons: He might bring some value as a left-handed power hitter who could fetch a good pitcher or two in return; and he is an anti-Semite who believes Jews are condemned to hell, which may not amuse new owners Lerner, Cohen, Tanenbaum and Kasten.
Posted by Ira