I’m not the biggest basketball fan in the world, partly because I had no skill at it despite being taller than most of my friends. It’s also because I never learned, or figured out, the fine points of strategy and tactics. And by the time I got a grasp of the game by attending and then covering college games from the mid-60s to mid-70s, the game started changing.

It was a five-man game with no shot clock, leading to some ridiculous – but winning –strategies by which a weak team went to the locker room at halftime once with a 3-2 lead. Things picked up in the second half and overtime for a 31-30 upset. 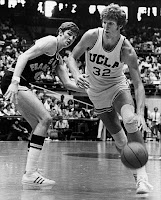 David Thompson, Len Elmore – but back then it seemed coaching and teamwork made for strong teams.

Now, college basketball is played by professionals-in-training and played for their personal glory and highlight reels. The athleticism is at the outer edge of human physical achievement. But it is a circus, and if that’s what I want to see, well Ringling Brothers Barnum & Bailey comes to town around the same time as March madness. And for sheer entertainment for free, I can always watch Congress.
Posted by Ira