Howard Cosell was at once the most hated sportscaster in American – and the most loved.

In the league of political rhetoric, Senator Edward M. Kennedy has the same profile. I got a chance to see him on Tuesday when he was supposed to have made a big speech about my new field – health. But, instead, he spoke of Iraq a day before President Bush planned to announce an escalation of U.S. forces.

Kennedy, as an avatar of progressive passion, is a frustrating character. Although he is the third longest-serving senator of all time, he can barely articulate an unscripted answer to the most basic of questions, like “Why do you want to be president?”

But when armed with a simple and elegant speech, a Teleprompter and a live audience, he can make you stand up and cheer and start looking for the nearest picket line, or break down in tears -- if you are a liberal of a certain age. The latter most certainly at his funeral oration for his second murdered brother in 1968.

In 1980, when I briefly covered a portion of his presidential campaign, I saw old women cry in Milwaukee’s Serb Hall after they reached up to the stage to touch hands as he departed for the next stop. He was off-script that night, and I will never forget him railing with red-faced indignation that while senators and representatives have free medical care, most American mothers wondered, when their babies were ill, “Are they 50 dollars sick or 100 dollars sick?”

After a stumbling, bumbling start, he was clearly the favorite of Democrats to snatch the nomination from incumbent Jimmy Carter. But Carter, operating under party rules designed to prevent a smoke-filled-room selection like Kennedy, had sewn up the entire National Education Association, whose delegates populate every single town in the country and who composed about 25 percent of the entire nominating convention.

When Kennedy conceded defeat to the throngs in the steamy Madison Square Garden, the thousands of Democrats on the convention floor could not – would not – stop cheering. Had they been able to, the Carter delegates would dumped their peanut farmer and gone for a Kennedy Restoration. In defeat, Kennedy shall forever be remembered in the annals of rhetoric for what set off that riot of affection and hosannas for what might have been.

I could be mistaken, but I think I recall that the 20-minute riot of affection for Kennedy was put to a stop only when a Carter aide signaled the band to play the national anthem.

So, I am grateful to have seen and heard up once 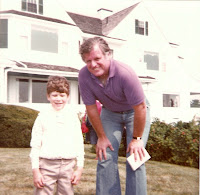 again up close on Thursday. The opportunity arose not because I cover politics anymore but as a member of the National Press Club speakers committee, I helped out at the last minute in putting together a head table on behalf of the event’s organizer (pictured above and to the right), who was out of the country the previous week.

The organizer had first met Kennedy at Hyannisport in 1981, when he was 5 years old and accompanying his father to a Hyannisport party the senator threw for the press who covered his campaign the year before. This time, I just stayed out of the way. But I still had gooseflesh.
Posted by Ira