The House of Representatives on Wednesday passed a bill to raise the minimum wage. The president, later in the day, appealed to Americans’ minimum rage.

Was anyone even watching his address to the nation? The American people seem bored by the war, having decided long ago what the right course is and having delivered the message to His Deafness in November.

The fact of the incomprehensible troop increase was leaked for so long by the White House that it was no longer news by the time the dissembler-in-chief commanded the airwaves to admit – like his father did after Iran-Contra -- that “mistakes were made.” 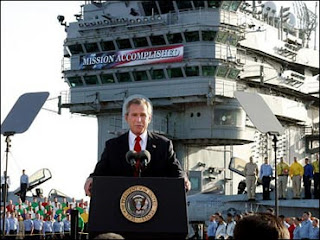 Note the utter inability of any Bush, any bluebood for that matter, so use the active voice. Is there anything wrong with “I made a mistake?”

At any rate, Bush set the bar so low for what would constitute “success” that at the first sign of any improvement in the metrics of anarchy he can claim “victory.”

My reaction to this speech is reminiscent of the message the “compassionate conservative” of 2000 who chided liberal educators for applying to black students “the soft bigotry of low expectations.”

The one remarkable thing about W is that our expectations of him already are lower than for any of his 41 predecessors they are so low they will inoculate the next 41 presidents – if the United States of America survives this one's vile ineptitude.
Posted by Ira