Gerald Ford and Me

I never knew or directly covered Gerald Ford, but his presidency came at an important transitional moment both for the country and for me. He is the one president I didn't despise at one point or another, although I voted for Gene McCarthy that year.

From my personal perspective, Ford was president when our first child was born, when I began covering national politics and when the obscenity known as Vietnam ended. 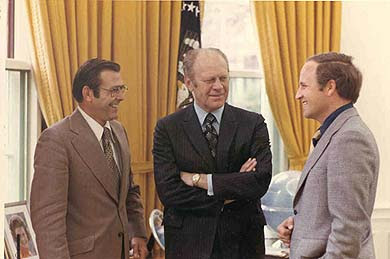 However much people will recall Ford as a "decent guy," remember this: He pardoned a war criminal and created two others, Dick Cheney and Donald Rumsfeld.

Did that pardon alone cost Ford the 1976 election as so many commentators are claiming now? I don't think so at all. I was pretty involved in coverage of that campaign, and I believe the outcome was a result of several factors:

Ford gets credit for closing what is now called a 30-point gap and making the Election Day contest a nailbiter. But that is a misreading of history in that the candidate nominated first by his party, in this case Carter, goes into the campaign with a large lead (and it wasn't 30). No one has won the presidency by 30 points, and even back then the country was divided closely.

Some pollsters believe that on the Sunday before the election, Ford was actually ahead. What happened between Sunday and Tuesday? Some believe that the Carter campaign secretly put attack ads on radio only on black stations in the South, and it was that that tipped the election.

I still think, however, the American voting public simply was not going to reward the Republican Party of Richard Nixon.

Ford also figured in my greatest disappointment as a UPI reporter. On the first day of the Republican convention of 1980, a coronation of Ronald Reagan, I was standing on a corner waiting for the light to change when a Republican pollster I recognized walked up beside me. I asked, idly, who he thought would be Reagan's running mate, and he replied, "Jerry Ford."

The guy was no jokester and, because he was close to the Ford wing of the party, and after a brief exchange, I believed him. I ran back to our convention bureau (no cell phones then) and reported my "scoop" on the only real story that week. I was dismissed by a couple of know-it-all superiors not because they doubted my reporting ability but because, "I don't believe it." (For the record here, UPI and most any other news organization at the time did not, as a condition of reporting something, have to believe things they were told in good faith by reliable sources to reliable reporters. Remember, journalists report only what people tell them.)

As everyone knows, there was such a plan to make Ford the VP, and it captivated the delegates and the nation, until both Reagan and Ford came to their senses at the last minute and realized the arrangement of a co-presidency would not work.

I can't prove this, but it is my belief from being there that at the time Ford was about to be anointed, George H.W. Bush, who had wanted the running mate slot, was submerging his sorrow in tumblers of alcohol flavored ice. He sure looked stunned and wobbly when the Secret Service brought him past my outpost beneath the podium superstructure to accept the v.p. nomination that night.

Just think, if Reagan and Ford had been able to put together a deal, H.W. would not have been president, and neither would W.

Anyway, while I have no particular love for Jerry Ford or his politics, like so much else in life, he looks a lot better in retrospect.
Posted by Ira