Not having a dog in the the Ohio State-Michigan Hundred Years War, I think what Bo Schembechler, who died suddenly on the eve of this year's "Game of the Century," and Woody Hayes, his dead arch-rival, represented was the worst in college sports. 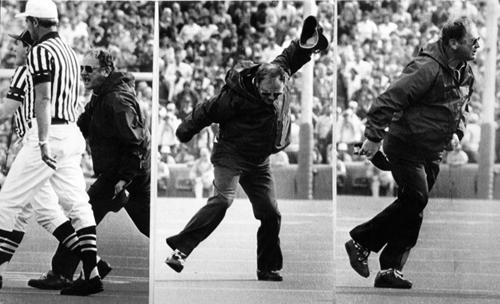 We are supposed to love a guy who publicly berated his players, who blamed referees for losses, who hated the very news media that made him into a saint and a genius, who tossed reporters out press conference, who considered Bobby Knight one of his closest friends and who, in a post-football incarnation as the ruinous president of the Detroit Tigers, was held responsible for firing Ernie Harwell, the best baseball announcer in history?

And Woody Hayes, his mentor at OSU, his coaching rival, the solid Midwestern patriot? For those who don't recall, this coaching "legend" ended his career exactly the way he lived it when, during a nationally televised post-season game, he punched an opposing player for no discernible reason.

As a coach, he ran up scores, threw tantrums at referees, broke equipment and voted for Nixon.

What the sports press has done this past 24 hours is, I don't know ... exemplary of the sports press!! Fawning garbage. I even heard one sportscaster on ESPN this morning (possibly Bonnie Bernstein, one of the airheads from my own alma mater) say nobody was as great an ambassador for the University of Michigan as Bo Schembechler. Did they never hear of someone named Ford who was the goddamn president of the United States? And an All-America player at Michigan when the Ohioan Schembechler was in first grade?

I love the game itself, but I never know for whom to root. They both have good teams, naturally, and they have great fight songs. Michigan dresses in blue and comes from a blue state, and Ohio State dresses in red and comes from a red state. Be that as it may, and based on how I feel about the Michigan grads who I know personally, I am leaning toward the Buckeyes this year.
Posted by Ira