Is This a Great Game or What!! 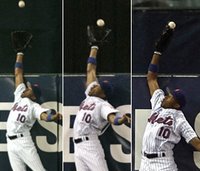 Baseball is a beautiful game. Perhaps summed up best about 20 years ago by a foreign-born free spirited pitcher for the St. Louis Cardinals, Joaquin Andujar. Asked to explain some unexpected development, he said: "You can sum up baseball in two words; 'Y'never know.'"

No, you never do.

The World Serious begins now between two teams that few people expected to be in it, the same Cardinals who almost performed one of the worst end-of-season chokes in the history of the sport, and the Tigers, who three years ago came within one loss of tying for the absolute worst record in history. The team they could not catch for losing the most games back in 2003 was the 1962 New York Mets, who should be in the Series instead of the Cardinals.

The reason they are not was they lost a game last night they should have won. They should have won not only because they were playing at home and because at a pivotal moment a no-name utility outfielder made a defensive catch that ranks next to Willie Mays's.

But the Mets -- who I finally came around to liking a little bit this year -- were done in by an equally unheard of no-name Cardinal who hit a home run in the 9th inning and by their own inability to slap a single in their half of the ninth with the bases loaded.

St. Louis won it fair and square, but who wants to root for them, a team owned by Budweiser beer? The Detroit Tigers represent the best in the game, and in America, and if there is any justice in baseball, they will win the best-of-seven series in five games.

Of course there is no justice in baseball, just as the movie said, "There is no crying in baseball." A St. Louis star, Scott Rolen, launched a routine throw into the grandstands early in the game but it caused no damage. He hits a ball over the fence, but Endy Chavez brings it back for an out. St. Louis should have lost just on the basis of those omens. But no. At the end of the game, Rolen laughs about his throw, which he said "hit the bull in the second row" -- a reference to the greatest baseball movie of all time, "Bull Durham."

Baseball, however, is even better than the movies.

Baseball is a beautiful game.
Posted by Ira