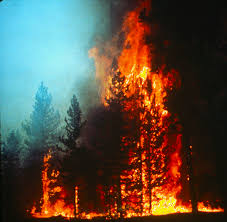 Even before this afternoon's crash of a small plane into an Upper East Side condo, I was going to write about television's perverse fetish with fire. (I don't know the DSM-IV definitions offhand, so I can't be sure whether all fetishes are perverse.) And as I write, coverage of this breaking story is unfolding and will be covered far beyond its importance due to the fact that every world news organizations has offices nearby and because the residents of that and nearby million-dollar apartments disproportionately are television correspondents.

Anyway, I noticed the phenomenon in the early 1980s, probably when local television stations became able through the use of satellites to broadcast stuff from anywhere in the country. First it was a pile of discarded tires that caught fire in West Virginia and burned for months. It provided riveting moving pictures for slow news days everywhere (plus improving the ambience of West Virginia itself.) Then a train carrying chemicals derailed in Louisiana and stayed on fire for days, bringing more hypnotic flames into living rooms (plus improving the ambience of Louisiana itself.)

Since then, American local television has shown every fire everywhere, regardless of its relevance to the local market. Today, the much-and-deservedly-maligned "Today" show on NBC even resorted to starting a fire to rouse their viewers. Actually, the producers worked in cooperation with my local fire department to set an empty house on fire to demonstrate the need for families to devise and employ an escape plan. And presumably to train fire academy cadets.

And to titillate arsonists, pyros, news directors and other assorted pervs.
Posted by Ira