"When in Doubt, Call them Out" 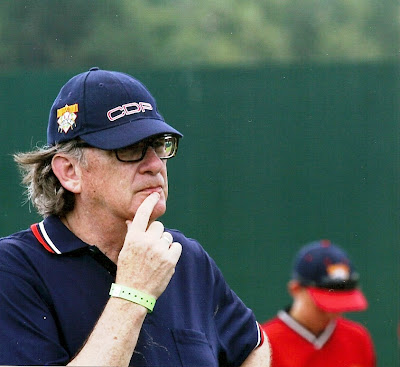 I am finally back after a week of umpiring at a baseball camp called Cooperstown Dreams Park, which brings in 104 teams of 12-year-olds a week during the summer, at somewhere between $700 and $1,200 a pop to bathe in the glory of the Hall of Fame about five miles away.

As an ump, there is much I leave to be desired, but I learned a lot about the art and craft and loved my time on perfectly manicured and lighted fields. The sleeping conditions were Third Worldly – 12 men to an un-air-conditioned barracks (24 kids to each of 100 or so of them) — and nothing to do in off hours but trade pins and listen to fat old tattooed men and a few young studs boast about their greatest umpiring moments.

Among the pearls of wisdom were, “When in doubt, call them out,” and “Let’s go out and crush some dreams today.” Along with, “Call strikes and let’s get off the field.” (I must say there were a couple of older gents who were very helpful to me on actual umping situations.)

What was worse than mingling with umpire egos as fat as their asses, was the owner of this million-dollar-a-week bonanza, who in two addresses to umpires, used the occasions to offer irrelevant and dark personal sermons about baseball, life, America, the flag, homosexuals, women and “a dark-complected kid with hair on his lip.”

The owner almost had me leaving in the first hours when he actually said, “This is not about the kids. It’s about that,”and he pointed to the flag, noting that he had several brothers who served in World War II back in the day when everyone honored war veterans, unlike now, he claimed.

Needless to say, I will not return later this summer, next year or ever. These kids are nice and damn good ballplayers, but they are under incredible pressure to perform, so much so that I saw at least two kids who already had had shoulder and knee surgery. The kids are being exploited by their parents and coaches, and the parents and coaches are being exploited by the ownership of this highly regimented, authority-driven dream -- of one person.

One other thought: Apparently all 12-year-old boys are named Hunter, Holden, Parker or Austin.