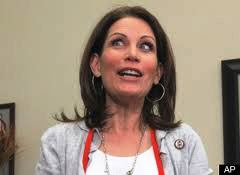 The death of Geraldine Ferraro, juxtaposed with a major political speech by Michele Bachmann yesterday reminds us of how far women still have to go.

My instinct would be to ignore Bachmann, (R-Village of the Damned), but we should not. Bachmann is at once too ripe a target for ridicule and too much of a threat to the generally held ideal that women are at least equal to men. She and Sarah Palin, who have never run anything of substance but their mouths -- do a disservice to women – and men – who would like to see just a shred of intellect in their would-be political leaders.

Oh, Newt Gingrich is scary crazy, too, but at least he changes his mind so often that the law of averages suggests he will be right on a few things, and a little less than far right once or twice. At a time when Republicans like Bachmann are demanding a coherent vision for the country, she is boasting of her sponsorship of something called “The Light Bulb Freedom of Choice Act,” repealing the requirement for those new energy-saving bulbs.

How fitting that she chooses to base the opening of her presidential campaign on returning the United States to a nation of the dim bulb that is loopy and has a head that is badly screwed on.
Posted by Ira