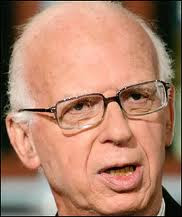 I might have spoken with David Broder twice, but the time I do remember he was polite and solicitous. I really only knew of him what he wrote and what others said of him. Lately, I had become critical of him for focusing on the same issues that I think have been stale for 20 years – the importance of political parties, the brilliance of certain state legislators and a centrism so devoid of passion that I believed him to have become an irrelevant read.

But count me among the throngs who were inspired to a journalism career early on by Broder’s reverence for politics at a time when it still seemed to be an honorable calling and his belief in shoe-leather reporting. For a time, Broder’s radical middle-of-the-roadism was the epitome of conventional wisdom, back when that phrase was honorable, too. He was the most knowledgeable and one of the more decent practitioners of political journalism – and I liked his straightforward writing style, which of course is harder to pull off than a 750-word Willsian pusillanimous screed that no one can understand.

Although I knew at the end that his columns would be the most boring on the op-ed page, they were still full of information and perspective and remained a must-read.
Posted by Ira