As the new Congress is seated, I am reminded of what Mo Udall said about democracy after his fifth straight second-place finish in the 1976 Democratic primaries:

“The people have spoken – the bastards.”

For the moment, I am more open than I may be later regarding the Republican majority in the House and the Republican obstructionists in the Senate. Again, to quote, a sage, this time H.L. Mencken:

"Democracy is the theory that the common people know what they want and deserve to get it good and hard.” 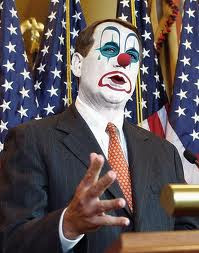 m a Democrat, both large and small D, and I say let these bimbos, baboons, bumpkins and bozos work their will. They either will have improved our beloved country, or they will have paved the way for a Democratic resurgence in two years.

Which may or may not be a good thing, given the propensity of this administration to sleep with its enemies and fuck its friends.

However, I am worried about the nature of the new Tea Partiers and the Republican leadership that is on its knees giving good capitulation to them.

They believe the Constitution is God-given instead of a product of contemporaneous compromise; they have no understanding of macro-economics, believing that a public budget is like a family budget; they are narrow nativists who are themselves or represent those who are jealous and who want to impose their morality on everyone else.

But apart from belief, and just in terms of policy, I am concerned that their announced fiscal goals are to cut spending on everything – except the military, veterans and “homeland security.”

I am flexible and open to opposing policy prescriptions, believing that they will succeed or fail on their merits and the public can then act. However my view of government and politics (which was my college major until I learned I had to take a language and more math) is founded on four basic themes, two from my parents’ generation and two from my own:

1) Runaway capitalism must be checked (The Depression.)

2) Authoritarianism in public life must be stopped as soon as it appears. (The Holocaust).

3) Foreign wars must be based on real threats, not political ideologies or crony capitalism. (Vietnam, Iraq).
4) Fairness is the paramount value in public policy. If merit and markets are to prevail, then everyone must have a fair shot at participating. (Civil rights and civil liberties.)

When I hear that the Republicans wish to cut taxes, repeal health care reform and cut all spending except for military, veterans and “homeland security,” then they are in contradiction to everything I hold dear.

Accuse me of name-calling, if you will, but elevating the military, veterans and “the homeland” has a name: Fascism.
Posted by Ira