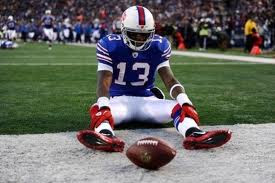 My contempt is well known for athletes who praise God for plays they are supposed to make.

So kudos, and praise the Lord, for Steven Johnson of the Bills who dropped an easy catch that would have won the game. I still can't believe this, but he did what I have always said Christian athletes should do in such situations. HE BLAMED GOD!

If God "follows" Stevie Johnson -- and maybe Twitter is God's revenge on people with too much time on their hands -- he/she would have read this post-game Tweet:

So I am a fan of this Johnson for not being the hypocrite that most Christian athletes are -- praising God and/or Jesus in public for things well below Their presumed level of interest but saying nothing when they screw up, as humans are wont to do.

One piece of advice, though, since Johnson does seem to relate to higher powers maybe he could change his uniform number. To, say, 666?
Posted by Ira