On Opening Day, the Nationals seemed finally to be a team worth investing hope, not to mention thousands of dollars in season tickets. They had up-and-coming talent on the Major League roster and, of course, Stephen Strasburg ready for June. They looked like a .500 ballclub. In mid-May they had 20 wins and 15 losses.

Today, mercifully, the horror has ended. The only two positive things that can be said about the season is that no other last-place team in the other five divisions had a better record and that the pitcher with the most wins was a reliever. As baseball aficionados know, when a relief pitcher has a lot of wins, it means the starting pitching stinks and so does the reliever – whose job it is to keep the game in hand so that he will not be in position to acquire statistical victories. 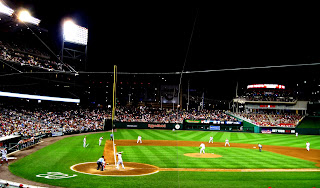 These 2010 Washington Nationals could not pitch past four innings at the start of a game, could not hit, could not field and could not run the bases better than your average Little Leaguer. Their manager is a Milquetoast with poor personnel and game-management skills. (Which reminds me of the great euphemism I heard at the Maryland football game last night when the PA announcer said misbehaving fans could be ejected from the stadium by “game management personnel” – meaning the yellow shirted, tattooed, beer-bellied bouncers.)

Anyway, when the best that can be said of a team is that its relief pitchers were adequate, it is like paying tribute to World War II Germany for the Dresden firefighters doing their job.
Posted by Ira