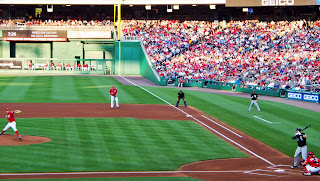 Jeezus pitched again for the Nats Friday and did not get the victory, though he did strike out 10 opponents. Again, a near-capacity crowd turned out, but it was not like the one for Stephen Strasburg’s debut. Those folks were die-hard baseball fans and as polite as an opera audience. And it was a Tuesday night, which kept the riff-raff out.

Being in Friday night’s crowd was like being at a Lakers game -- except the Lakers won -- in that you could spend the evening just eyeballing celebrities. Well, in Washington -- often described as Hollywood for the ugly -- the celebrities would include the following people who were in a narrow swath of my section :

One of the top political reporters for politico.com, the White House correspondent of politico.com, the chief congressional correspondent for the New York Times, one MSNBC anchor, a network correspondent, James (I have no idea what he does for a living) Carville, a former press secretary to a former Speaker of the House, the deputy press secretary of the current White House, the retired editor of the sports section of the Washington Post and his guest, the current chairman of that company. And up in a luxury suite one section over and one level up was some White Sox fan who traveled to and from the game in a motorcade.

I love baseball, and I love watching Strasburg pitch, but I sure wish the fans were more anonymous. They spend more time greeting one another and being seen than seeing what Jeezus hath wrought.