On the day Mike Rizzo was named general manager of the Nationals – and he seems to be the right guy for the job – I read in Sports Illustrated a poll of Major Leaguers on which players have done the least with the most talent.

Is it any surprise that four of the top five vote-getters are or were Nationals? Says something about the previous management of the team in both front office and dugout. Luckily, Jim Bowden and Manny Acta are like Adam Dunn home runs. Long gone.

For the record, in order of failure to take advantage of their gifts, are Wily Mo Pena, Daniel Cabrera, Elijah Dukes, J.D. Drew and Mike MacDougal. The first two are gone, but Dukes and MacDougal currently wear the Natinal uniform.

J.D. Drew is the punk who was drafted by the Phillies and refused a humongous salary so that he could re-enter the draft the following year for more money. Then the guy with an ego bigger than the left-centerfield gap in old Yankee Stadium declared he was a Bible-reading virgin.

Now he is a member of the Hated Red Sox, and the only way he gets near the Hall of Fame is to buy a ticket. 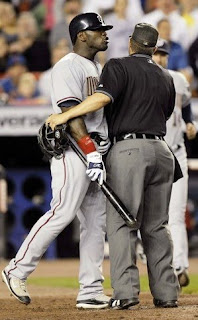 As for Elijah Dukes, the only threat he has ever been has been to his girlfriends and/or wives, one of whom had a restraining order issued against this multiple-convicted criminal for texting her the articulate love letter, “You dead, dawg!” Now if he could only hit Major League pitching as often and as hard as he hit his women, he might start fulfilling some potential.

Here is a guy, the best of whom it can be said was praised by his sister during a TV interview after she was asked to say something positive about him. “Well, he loves his five children. Each and every one of them.”

By whichever mother.
Posted by Ira