The Way It Will Never Be Again 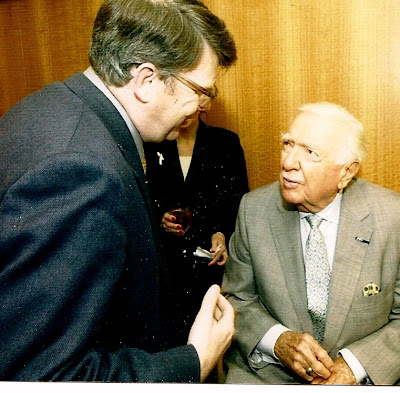 How quaint; how definitive; how final. When Walter Cronkite ended the single half-hour of national news that anyone would see on television with the words “and that’s the way it is,” that was the way it was.

I met Cronkite only once, a few years ago when he could barely hear anything but still had a voice so ingrained in us that when I do my weekly recorded reading of textbooks for the blind, I hear his crisp clipped, matter of fact, that’s-the-way-it-is voice through my own headphones when it comes time to give a historical date (“On Julyyyy seven-TEENTH, twothousandNIIINE…”

In our household, it was Huntley and Brinkley who defined our suppertime view of the world in my formative years, but after that, in our house and in my own young adulthood, Cronkite became the epitome of news itself -- delivered soberly and confidently -- so much so that if he was on vacation or an assignment, you felt the news that day wasn’t very important, that news itself was on hold till he returned.

The voice that rattles around my head when I think of “Uncle Walter” was not primarily from the evening newscast that he pioneered (demanding the title of managing editor, doing serious reporting himself and eschewing the garbage coverage that demeans today’s broadcast news.)

The Cronkite I first heard and the one that stays with me is the narrator of World War II documentaries called “Air Power” and “The Twentieth Century,” shown every Sunday evening. (The raw material for those shows is now the staple of various Hitler networks owned by Discovery.) He later became the voice and personification of the U.S. space program at a time when it was all right for a television news person to root for something. (Well, it wasn’t okay, but Cronkite pulled it off.)

Later on, as he was becoming “the most trusted man in America” (by actually polling), Cronkite did as much as any single human being to end the Vietnam War by making a reporting trip there and concluding in a special segment of his newscast when he returned that the war was “unwinnable.” (Well, that wasn’t okay, either, but Cronkite pulled it off, especially when Lyndon Johnson said out loud that when he lost Cronkite, he lost the American public.) During that memorable broadcast, Cronkite did something else that was unheard of. He got out from behind the anchor desk and stood up to deliver his verdict. (And that was okay.)

Cronkite, one of the cadre of “Murrow boys” who reported live on radio from the World War II battle theaters, helped make CBS for generations the network you tuned to in a crisis, when you absolutely, positively had to know what was really going on.

What made Walter Cronkite great was that, no matter his title or status, he never rose above the job description of “reporter” – the lowest rank in the hierarchy of journalism but the one anyone who has ever been in the business wears with pride. And it was always with pride that Walter Cronkite and I began our careers with the same company, then United Press, later United Press International and now, its name desecrated by the Rev. Sun Myung Moon’s ownership, just a memory.

For a reminiscence from a former colleague who knew Cronkite well, click here.