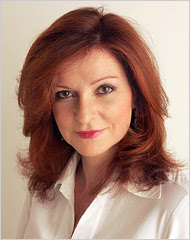 As is often the case, New York Times columnist Maureen Dowd, puts in one paragraph what it takes cable TV weeks to miss:

"The man who never talked is now the man who won’t shut up. The man who wouldn’t list his office in the federal jobs directory, who had the vice president’s residence blocked on Google Earth, who went to the Supreme Court to keep from revealing which energy executives helped him write the nation’s energy policy, is now endlessly yelping about how President Obama is holding back documents that should be made public."
Posted by Ira