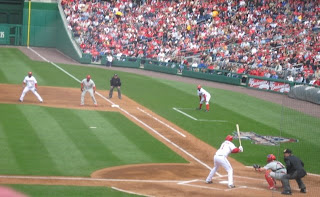 The Philadelphia Phillies' legendary announcer, Harry Kalas, dropped dead in the radio booth at Nationals Park in Washington today, just before game he was about to call.

I envy him. At least he did not have to watch the most ignominious games of baseball played by one team that I have seen in a long time of following rancid teams.

I refer, of course, to the Washington Nationals, with whom I contracted to attend all 81 of their games this year. Would that the Obama Administration's desire to void contracts with Wall Street would apply to baseball team so putrid that the president, himself, refused to do the traditional ceremonial honor of throwing out the first ball at the first home game of the season.

The Phillies defeated the Nationals, 9-8, in what the score might indicate was an exciting game. Exciting, perhaps, if you are Mr. Applegate, the central character in "Damn Yankees," who buys the soul of a middle aged man in order that he be transformed into a hero who leads the Washington team to a pennant over the hated New York Yankees.

The Nationals planned to open the season with a second baseman named Anderson Hernandez. But he was injured in spring training and was aiming to be back at his post next week, two weeks into the regular season. His backup, Ronnie Belliard, then became injured. Then HIS backup, Willie Harris, became injured. Yesterday, the manager was forced to play reserve shortstop Alberto Gonzalez (no not THAT one, although THAT one might be an able utility infielder for someone) at second base. So today, in front of the largest crowd ever to fill the new stadium (minus one Harry Kalas), the moron manager Manny Acta decided to start the injured Hernandez instead of the usable, if nonflashy, Gonzalez.

Hernandez booted the first two ground balls hit his way, but in his defense it was the first time he played in a real game in several weeks. That led to a couple of Phillies runs. Later, the best relief pitcher, Saul Rivera, came into the game and promptly plunked two Phillies in a row, putting two men on base with none out to face only the most monstrous home run hitter in the league -- Ryan Howard. Since Rivera could not control his aim, he put a fastball right over the plate, and it landed about 430 feet away, scoring three runs that never should have scored.

Later, the Nationals' faux slugger Adam Dunn, who did hit a meaningless home run, loafed after a single, and when he noticed the runner was taking advantage of his lassitude to try for a double, accordingly fell down trying to pick the ball up. That led to a run. In all, the Phillies scored three runs on their own, to the Nationals' eight runs. But the Nats handed six runs to Philadelphia through ineptitude reminscent of the Bad News Bears. At least the BNB were trying.

And on and on. The was the seventh game of the 2009 season. The Nationals are the only team in baseball that in such time has zero victories. I followed the 1988 Baltimore Orioles when they got off to a record-in-futility 0-21 start.

That Baltimore team was the Navy Seals in comparison to the Washington Nationals dinghy Somalian pirates.

At least I have great seats.

If anyone wants them, make an offer.
Posted by Ira