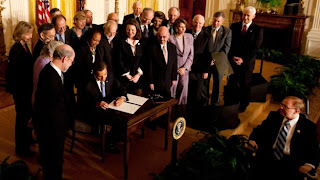 Thanks a lot, Bush

Eight lost years in the fight against heart disease, cancer, Parkinson’s are coming to an end now that President Obama has lifted most federal restrictions on the use of embryonic stem cells.

What is important beyond the Executive Order he issued today are the words that went with it, a recognition that George W. Bush retarded (now there’s a fun phrase) science and tried to turn back the scientific clock to Newton. While the past several hundred years in science have progressed toward the use of evidence to make public policy, Bush created policy and then had his industry-fed know-nothings manufacture evidence. Now, science is recognized, however imperfect it is, as the proper driver of policy.

It was never about science or ideology or even religion for that matter. Bush’s worldview was that money is God and science ought not get in the way of it. Progress to Bush was greed and death. No one will ever know how many people died last year from disease that might have been contained had stem cell research gone on the past eight years. God knows how many hundreds of thousands this butcher had massacred in order to show his father what toughness really is.

What that hateful, misanthropic little shit did to his country, and the world, can never be redeemed unless he makes one more mistake and travels to any other country in the world and becomes subject to arrest and trial on charges of war crimes.

I used to call him Bushitler, but it got old and it pissed people off. I mean there was no way of persuading people by calling names. But the latest stuff coming out of the Obama Justice Department shows how close he came to pulling off a fascist coup.

He was given legal advice by brownshirted bullies in his Justice Department that in wartime he had unlimited powers—powers to detain people without a warrant, including U.S. citizens; engage in torture; hold people at Guantanamo without charges and without evidence of their complicity in anything adverse to the United States; and to take action against the press. Apparently he decided on his own, without lawyers, that if your country is attacked, you should retaliate against some other country and kill its leader.

The Bushitler administration was ordered by a court to preserve videotapes of prisoner interrogations. At first, these cowardly liars said they didn’t have any. Then they said they had two. Then it turns out, thanks to the Obama administration, they had 92 tapes AND DESTROYED THEM ALL in violation of a court order. Legality meant nothing to these Chuckies.

Any time you think it’s unfair to limit a president to two terms, consider that a man with no character, no brains, no conscience and no record stole an election, ran a party that tried to deny Democrats the right to vote in dozens of states and almost became the dictator of America.

I suppose one could thank him for not actually doing everything he believed he had the power to do. But maybe he didn’t totally understand the words his lawyers put in front of him. Or maybe, just maybe, God spoke to him again and said, “You’re starting to piss me off!”

I don’t think there needs to be any legal action taken against Bush and his henchmen, because it would set a terrible precedent, but a congressional investigation, an independent Truth Commission and constant public reminders of what he did might help make sure that it can’t happen here.
Posted by Ira