Since the Kennedy Administration, I can’t remember missing a televised presidential news conference, and I’ve been lucky enough to attend quite a few.

But last night, I bypassed it for another inside-the-Beltway skirmish. This one was more uneven than any president against any press, as the Maryland basketball team demolished Utah in the “Big Dance,” the NCAA basketball tournament, to advance to the "Sweet Sixteen" round.

This “dance,” however, was actually with women. 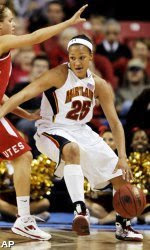 Women’s basketball can almost fill a big-time college arena if a national title is on the line, bring grizzled old men out of the closet wearing sweatshirts celebrating women's athleticism, and demonstrate the beauty and strategy of basketball the way it used to be played before sweaty 7-foot men starting dunking, fouling and calling timeouts.

It is pure basketball, and I would like to say every bit as competitive as the men's version, but the reality is that a few teams are dominant, and Maryland is one of them. There are only 32 teams in the championship tournament, compared to 65 in the men’s, and that—along with so much else about the women’s game—is a money thing.

Were it not for Title IX of some education act long ago, women’s sports would not be so popular as they are now, even though equality under the law in this case has meant that a lot of college men’s teams in lesser-revenue sports have been eliminated.

But the women still cannot fill every arena, do not have as deep a pool of talent starting in grade school, do not command major attention on sports pages and, frankly, cannot guarantee a big TV audience or sell out even reasonably sized arenas. Thus, the best schools, like Maryland, are allowed to play at their home court in the first rounds of the tournament, because city indoor arenas would not find it profitable to book their space years ahead of time.

And because of money, based on the sport’s still limited appeal, most players can look forward to careers other than in professional sports, which I assume means they are attentive to grades and have a broader world view than do male athletes.

The good nature of the crowd and of the players themselves, compared to a men’s game, is the difference between figure skating and hockey—not that these Maryland women don’t mind hip-checking an opponent every now and then.

The Maryland team won because their size and experience permitted them to rebound at will and their defense forced Utah to take long shots at the basket. Few of them for the money.

Once you looked at the lineups, you knew it would be Maryland’s night. Their team consists of people named Anjalé, Demauria, Yemi and Drey, and the disadvantaged Utes were peopled by assorted Kalees, Josies, Halies and Katies.
Posted by Ira