Here are the remarks of this blog's favorite journalist as he accepted this year's Everett McKinley Dirksen award (from Dirksen granddaughter Cissy Baker) last week for best congressional reporting. With the news business as stable as confetti at a ticker tape parade, his "You like me, you really like me" speech was about the only levity at the celebratory banquet. 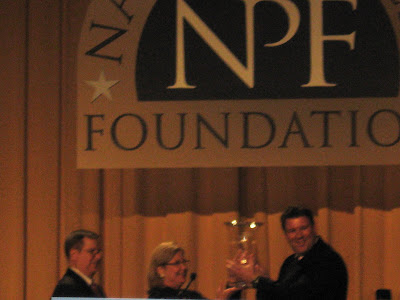 First, foremost and always, I want to thank my wife, Stephanie Allen, for possessing the steadiness, sense of humor and appreciation of the absurd necessary to live with me and love me.
I'd like to thank my parents for not giving me back when they found out I couldn't throw a baseball with my left hand, and I'd like to thank my sister for always being in my corner.
Thank you to the National Press Foundation, my colleagues and editors at CQ, particularly the lead editor on the piece, the immensely talented John Cranford.
Now, I'd like to start on something of a sad note.
Since he broke into the big leagues when we were both 18, I've looked to Alex Rodriguez as a measuring stick against which to gauge my own success.
My ballplaying career ended at a small college. No contract of mine has ever started with the figure 250 or ended with the word million.
And let's just say that Madonna has been avoiding my phone calls since 1984.
But Alex and I do have some things in common. After all, Yankees fans, he and I still do have the same number of World Series rings: ZERO!
And there's one more thing we have in common: Drugs.I respect A-Rod for confessing, and in that spirit I feel compelled to make my own admission. I have experimented with two modern-day performance enhancers. They are known as blogging and tweeting.
I was young. I was stupid. I was naive.I can assure you that they, in and of themselves, have not made me a better journalist. But they have taught me something about our industry.Our online future relies on our ability to remain in touch with our print and broadcast past. It's too easy to post without looking.
I'd like to ask Rachel Bloom, CQ's senior researcher, to stand up and wave. You can sit down now, Rachel.
Rachel has a job, chief fact-checker for a weekly magazine, that seems like an anachronism now that newsroom status is determined by how often your stories get linked by Drudge or Huffington Post.

But Rachel is the lifeblood of our industry. She led a team of researchers who recreated my spreadsheets, triple-checked names and locations of earmarks and forced me to prove every last sentence of an 8,000-word set of stories.

Then, after publishing the stories, we did a crazy thing: We put them all online.
Our past and our future are not irreconcilable. We need to make sure that as we continue transitioning into the era of mobile browsers that we remember what makes our news valuable: That it is true.
Rachel's work, and that of a handful of her colleagues, left no doubt about the truths revealed -- that earmarks are distributed by the powerful to the powerful, that they are given out to politically vulnerable incumbents to shore up their re-election chances and that minorities end up with less than their white counterparts. We also examined how earmarks help communities overlooked by the executive branch.We stand by it, and no one has challenged it.
Members of Congress in both political parties and across the ideological spectrum have cited our findings, and legislation has been introduced based on them.
This is how journalism is supposed to work in a free society: Take information from a small number of people, give it to a larger number of people and trust that people will make better decisions because they are better informed.

Besides, it's a good business model. Ask a CQ Sales rep what people will pay for access to accurate, unbiased information.
Opinions are abundant and free. I fear that if we are not vigilant about accuracy and objectivity, it won't be long before the first question at a presidential news conference is posed by an essayist from mybarackobama.com
In his June 10, 1964, floor speech on the Civil Rights Act, Everett Dirksen paraphrased the writer Victor Hugo: "Stronger than all the armies is an idea whose time has come," he said.
The time when fact reigns over speculation will come again. The spread of accurate information has been, and always will be, vital to the perfection of our union.
One final note: I'd like to thank some of the past winners of the Dirksen Award who have influenced me personally and been helpful in my career. Jack Kozszcuk, John Cochran, Susan Milligan, Paul Kane, Elaine Povich (who has known me since I was a pre-schooler), Brody Mullins (who was a Little League All-Star with me when we could still dream of playing shortstop in the majors). And Jill Zuckman, who cheerfully noted in a congratulatory e-mail that my obituary will now reflect that I am an award-winning journalist ... I love reporters.
Thank you.
Posted by Ira