I've been away for a few days in a place where I had no TV and limited Internet service. I didn't like that aspect, but I survived. And as much of a political and TV news junkie as I have been all my life, I am finding myself loathe to pay attention anymore.

This political campaign and the day-to-day coverage of it is sickening. Let me amend that. The McCain campaign is sickening and has made the American people sicker than usual.

Our culture, our schools, our news media, our politics are all based on the fear that someone might value intelligence. Every four years, with rare exception, the American people have a choice for president between someone who is smarter and more thoughtful than the other, and then vote for the stupid one. It is said the average American wants to vote for people like themselves. If so, that proves that the American Empire will be dead before I will.

Do you want a plumber who knows only as much as you? How about a teacher for your children? How about an auto mechanic? Maybe a brain surgeon?

In a vacuum, I could not have drawn up two better presidential candidates than John Kerry and Barack Obama. And I don't mean that because I would agree with their programs and policies. But it is because they are the kind of leaders who you know would -- even if they were wrong -- approach serious issues with some thought.

So, I have not been watching much TV lately and don't plan to. I have been reading, instead.

I have been reading lengthy excerpts of Bob Woodward's new book, which has the interviews and tapes to back up the lies Bush spewed about "listening to the generals." The generals thought he was nuts and all but told him so. Except one. The guy, who against all evidence and military expertise, told Bush what he wanted to hear. Thus, as MoveOn.com said last year to much chagrin, he should be called "General Betray Us."

I have been reading The New Yorker, about Cindy McCain's phony biography and John McCain's laughable interest in family values -- someone who was dating her for seven months before his divorce and who barely has lived with her since, never noticing she was a drug addict.

He is a "me-first" conniver who used his captivity to maneuver himself into a cushy job in the Navy (travel guide and pimp for members of the Senate) and then committed adultery to step into a $100 million fortune that enabled him to run for office with no discernible philosophy. His personal and political ethics are those of an Arizona cactus -- you have to deal with the prick before you find any substance. 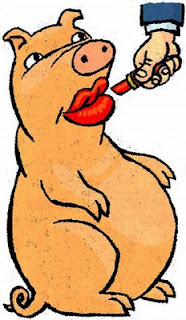 I have been reading The New York Times about Sarah Palin's method of governing -- laced with incompetent hires, based on secrecy, baked with graft and corruption and raked with vengeance. She makes ignorance both a family and a national value. But that should make no difference when the American public plans to elect a 72-year-old multiple-cancer survivor who would start a war with Russia in order to get elected.


Surprise, folks. The United States is about to lose its status as the world's No. 1 economy, it long ago fell from the best place in the world to get medical care and its military is so weak we better hope Canada doesn't cause us trouble. Most of our up-and-coming scientists and engineers are Chinese or South Asian. As has been said before, by people more clever than I, "We are borrowing money from China to pay Saudi Arabia."

In the aggregate, the U.S. economy is reasonably strong, but the gap between rich and poor is as big as it was during the Depression. Yet, one candidate wants to reward the rich by taxing them less and one wants to find solutions regardless of who proposes them.

The commonweal is falling apart, and we have two choices. It is said, "We don't know Obama." Well, he has been under public scrutiny for nearly two years, so if anyone doesn't know him, it is not his fault. We do know McCain and Palin, and the likelihood that they will win the election speaks volumes about the lipstick voters are getting ready to apply to their country.
Posted by Ira