Here is my house. My only house. 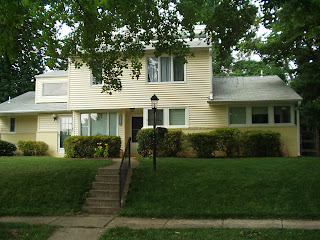 How many do YOU own?

John McCain owns eight (maybe 10), but he didn't even know how many when he was asked by a conservative-leaning news organization (Politico.com) and said he would ask his staff how many. Later in the day, an aide said he only actually lives in four of them.

No one who runs for president is exactly in poverty, and when you write books and practice law, as Obama did, it is not absurd to live in a house valued on paper at a million bucks. But I think most people who have only one house and maybe only one job find something peculiar about a man who doesn't know how many houses he and his wife own but whose tax returns show they increased their budget for household employees from $184,000 in 2006 to $273,000 in 2007.

I can tell you this, however. Whoever moves into the White House next January will have spent close to half a billion for it -- and his soul.

When McCain inadvertently revealed how out of touch he is, his attack dogs on cable TV responded to the latest feeble-minded expression of their candidate's complete remoteness from reality with a three-fold series of nonsequiturs that only the American people would believe.

One, they claim that Barack Obama's house was bought with the help (mostly false) of a convicted felon; two, they claim that Obama is attacking McCain's wife (the real owner of most of them and whose finances are a huge secret); three McCain's housing was once a prison.

The formal debates will be fun:

Obama: "You called for summer gasoline tax rebate, which everyone except you and Hillary Clinton believe will result in more driving and even higher prices while at the same time killing road and bridge repairs."

McCain: "I was in a prison camp and couldn't drive."

Obama: "You said you don't know much about the economy. What kind of experience is that?"

McCain: "I have plenty of experience about economizing. I was in a prison camp. I am a patriot and you are not."

Obama: "You said (on such and such a date) you would be running a civil campaign. Yet your first TV ad said you were 'an American president America's been waiting for.' And then you said I would rather lose a war than an election. How dare you accuse me of treason!"

McCain: "I was in a prison camp and your wife is a radical."

I would like to say that it has been a long time since such an intellectually vapid, mean tempered crony of lobbyists and convicted malfeasants has run for president. But I can't. It is a prerequisite for winning the Republican nomination.

This campaign is amusing and sad at the same time. Even with Karl Rove's minions turning a once semi-decent human being into a sultan of snot, McCain can't help but stepping on his own tongue daily.

Tuesday, he said, "Behind all of these claims and positions by Senator Obama lies the ambition to be president." Apparently, McCain didn't remember that his top aides wrote in McCain's "autobiography" the following:

"I didn't decide to run for president to start a national crusade for the political reforms I believed in or to run a campaign as if it were some grand act of patriotism. In truth, I wanted to be president because it had become my ambition to be president."

Oh, let's not even get into McCain's support for the Confederate flag flying over the South Carolina state capitol (maybe he meant South Carolina's Confederate fag, Lindsey Graham) or McCain's opposition to making Martin Luther King's birthday a national holiday (until the NFL threatened to yank the Super Bowl out of Phoenix.) Or McCain's membership in the Keating Five or having Jack Abramoff buttboy Ralph Reed raise money for him. Or his support and opposition to the war in Iraq depending on what week it is.

The sadness attached to McCain's campaign is that the American people usually vote their fears and hatreds instead of their wallets or brains. I would not be surprised if McCain wins the election and even served longer than his 19th Century doppleganger William Henry Harrison.

In the meantime, he said the other day he favors bringing back the draft and just today President Bush -- whom McCain must think is a wuss -- agreed with the government of Iraq on a, yes, TIMETABLE! for withdrawal. The same proposal that McCain thinks makes Obama a traitor.

If McCain thinks the Hanoi Hilton was hell, wait till he checks into for eternity the real one.
Posted by Ira