What Would Jesus Do? Kick Wright's Ass!
Watching the ego freak Jeremiah Wright, one could get whiplash. Last Friday, a calm, reasoned Wright, aided by lengthy video clips, put into proper context his provocative sermons about America. On Sunday, he addressed the NAACP and delivered an interesting, if rather dated and fatuous dissertation on linguistics.

On Monday, he proved himself to be such a dithering fool that his performance before the National Press Club can only help Barack Obama, his congregant.

No one in America can be stupid enough to link Obama’s view with those of Wright. Wright's view is only that which he sees in a mirror.

The fact is, Wright is the perpetrator of what I think is the worst of all anti-black stereotypes, whereby the speaker dances around an idea using big words he figures no one knows, quotes phony experts, contradicts himself within the same speech and when questioned attacks the questioner for not having read the same tracts he read.

This behavior was already spoof-worthy by 1970, but now it threatens to obliterate the Obama campaign like Hillary Clinton promises to obliterate Iran.

I listened at home on TV and read the transcript a couple of times. The Underground Railroad ran not far from where I was raised, and all I can say about Wright is that he just fell of the “Stupid Railroad.” It would take too much space to explain fully the malice and avarice this man engenders. His speech Monday was just a performance that will naturally lead to a book, the profits of which will line his pockets with more than just the lint that also passes for his brain.

Carry Indiana
Supreme Court Justice Antonino Scalia told viewers of “60 Minutes” who are appalled at the Court’s legally ludicrous decision making George Bush president to “get over it.

The Court, as presently constituted, is nothing but a vehicle for delivering Republicans to office, as witness Monday’s decision upholding Indiana’s racist voting law. The state now requires a government identification in order to vote. This is akin to the poll tax another Supreme Court ruled an unconstitutional violation of black voting rights. Why? Because the very people who do not have government IDs, or who would have to travel and pay a fee to get them, are citizens and overwhelmingly Democratic. They are the homeless, the poor, the elderly. A photo ID is a restriction on voting. Indiana claims it will prevent fraudulent voting.

The decision might have been arguable but for the fact there is no recorded case of voter fraud in Indiana. What it was about was ensuring that Indiana votes Republican in the general election and, probably, for Hillary Clinton in the Democratic primary.

A Pinto, Not a Lincoln
Speaking of Her Royal Phoniness, she challenged Obama to yet another debate. In putting on her cultural overalls, that woman, Hillary Clinton, said “we could do it anywhere in North Carolina” even on a flatbed truck. I wonder if that flatbed has the same Astroturf her husband bragged to Don Imus lined the floor of his pickup.

“Temerity” must be her middle name. The lyin’ queen suggested that she and Obama debate just like Lincoln and Douglas. John McCain is old enough to recall that the Lincoln-Douglas debates were not debates. They consisted of thoughtful, detailed one-hour speeches and 30-minute rebuttals, based on issues.

Cheap Pickup
A few weeks ago, Hillary Clinton did something no one can remember happening before. She endorsed the Republican candidate for president over a Democratic primary opponent by saing by saying John McCain could pass the “commander in chief” test but Obama could not.

Now she has joined McCain in an idea that hasbeen thoroughly ridiculed by transportation experts from both parties – a suspension of the 18.4-cents-a-gallon federal gasoline tax between Memorial Day and Labor Day.

What is wrong with this idea?

-- Drivers would get a puny amount in gasoline savings.
-- There is no way to know, given the complicated distribution system, whether the tax really would be refunded.
-- The gasoline tax pays for road repairs. Far more dangerous to the immediate future of you and me than dirty air is the fact that the nation’s roads, bridges, tunnels and overpasses are crumbling. Suspend the gas tax and hope another Interstate bridge doesn’t fall into the river.
-- It is political pandering, especially when she says the loss of revenue would be made up by taxing oil company profits. How long do you think it would take before
that tax is passed on to consumers?

What’s right with it?

It is one more argument for electing a real Republican over a Democrat who pretends to be one. Which is exactly what I intend to do. If the Supreme Court hasn’t taken my vote away by November.

While the dinner does raise money for journalism scholarships, it has descended into a Hieronymus Bosch portrait of the press and politicians sucking up to each other and both sucking up to Hollywood. Every year, the president comes and attempts to be funny. In recent years, he has been better than the professional comedians hired to entertain. Need I say more than Stephen Colbert, Rich Little and Craig Ferguson?

The real show is before the proceedings start when the famous, near-famous and wannabe famous officials and celebrities walk into the Washington Hilton on a virtual red carpet lined with local paparazzi. They needed an official “cheat sheet” to identify whom they were supposed to photograph. Following what everyone calls the most torturous event this side of Guantanamo come the “after-parties,” bacchanalias thrown by major publishers designed to assign press, politicians and actors to A- B- and C-lists.

May the last one out turn into a pillar of shit. 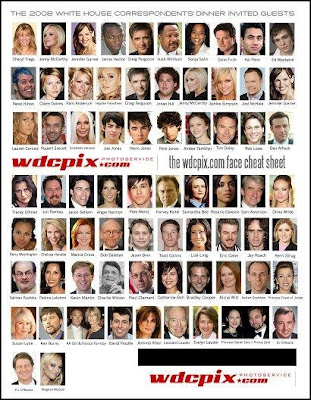