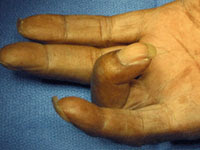 I am starting a steroids regimen tomorrow morning, and I expect to report to spring training in great shape.

Seriously, I finally went to the doctor today with what I thought was a stupid complaint – the middle finger on my left hand would be bent and painful when I woke up every morning maybe for the past two months. To straighten it, I would have to either exert force on the middle knuckle or pop it out with my other hand. The pain was getting worse and spreading to my ring finger.

I told the doctor I knew this was a silly thing, but maybe it was a precursor of arthritis. My wife had said the middle finger would heal if I stopped driving so aggressively. Anyway, the doc said instantly this is a common malady known as “trigger finger.” It is an inflammation of the tendon, possibly curable by rest, steroid pills (which I was prescribed), painful steroid injection (into the finger) or, ultimately, surgery.

I am right-handed, so I am lucky the affliction is in my left hand. It could be a result of a lot of things, mostly aging, in my opinion. But as a keyboard overuser, I really think this lesson in stenosing tenosynovitis is brought to you by the letter E.
Posted by Ira