As a schoolboy in , I was justly proud to learn of my state’s history of religious toleration embodied in the Toleration Acts enacted in the colony in 1649. Then I learned that the Act prescribed freedom of religions for everyone – but only if they were Christian. 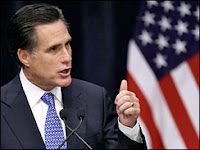 Which brings us to Mitt Romney, who I admit gave one of the better political speeches of a generation today in service to his Mormonism, his belief in Jesus and his desire to become president and banish to perdition the would-be “Christian candidate” Mike Huckabee. Still, in totality the speech sounded more like a whine – and an alarm for what may become of this country if we keep electing pastors instead of presidents.

Romney is quite impressive, with the hair, the chin, the voice and the sanctimony to become president. But his speech fundamentally (pun intended) denies history and law.

That “our Creator” gave us liberty is a humble rhetorical gesture, but recall He is cited as the author of freedom in the Declaration of Independence and not in the Constitution, which is, of course, the supreme law of the land and a document that specifically says, “…no religious test shall ever be required as a qualification to any office or public trust under the United States.”

The Founding Fathers were believers, but mostly deist, Unitarian or Episcopalian, not given to public demonstrations of piety.

And what to make of the absurd assertion Romney makes that "Freedom requires religion just as religion requires freedom?” Nice trope, but come on, Mitt! There is liberty in and , for sure, and they are among the most Catholic of countries. Except very few French or Italians bother to practice their religion. Take , a state directly found upon religion. Israelis are free, and most are not pious nor even particularly observant, and the most devout Jews – Hasidim – do not even support the existence of .

For Romney to talk of other religions as “the evangelicals,” “the Lutherans,” “the Jews” or “the Muslims” is to marginalize them as another “group” instead of celebrating them as individuals. By calling them “the” whatevers is exactly what leads to the kind of prejudice Romney claims to be the victim of.

There are other oddities in his speech, not the least of which is his constant reference to “some” or “others” – the unnamed straw men who would demand he renounce his faith or dare to believe God has nothing to do with political freedom or who want to banish God from public life. “They” exist, sadly, only in his imagination.

Romney's entire thesis linking God with liberty is undone by his own words: "No people in the history of the world have sacrificed as much for liberty. The lives of hundreds of thousands of 's sons and daughters were laid down during the last century to preserve freedom.”

That is, from the Revolution through World War II, liberty was neither discovered nor given to us as the result of anything other than fighting for it, bleeding for it and dying for it in warfare against other people who prayed to the same God, or same prophet.

And what to make of this bizarre imagery: “As I travel across the country and see our towns and cities, I'm always moved by the many houses of worship with their steeples, all pointing to heaven, reminding us of the source of life's blessings.”

Now, I know Republicans are not particularly friendly to science, but if Romney is moved by rooftop architecture “pointing to heaven,” I suggest he renew acquaintanceships with Messrs. Copernicus, Galileo and to remind himself that there is no other place a spire can point. (I would not even ask what he thinks of the of .)

The fact of the matter is that Romney and his chief tormentor, Huckabee, are playing a popular political game of cloaking themselves in the robes of the Almighty, which is quite modern, really, starting with Ronald Reagan, the least church-going of any recent president.

Professor David Domke at the studies presidential rhetoric and finds that:

“On average, presidents from Franklin Roosevelt --the beginning of the modern presidency -- to Carter mentioned God in less than half of their major addresses. In contrast, Reagan, Bush, Bill Clinton, and George W. Bush (through year six) all did so in more than 90 percent of theirs. Further, the total number of references to God in the average presidential speech since 1981 was an astounding 120 percent higher than the average speech from 1933-1980. References to broader religious terms, such as faith, pray, sacred, worship, and crusade increased by 60 percent.”

Invoking God has given us the most intolerant, meanest political landscape of our history – not to mention an unnecessary war and the torture of nonbelievers. No matter what you believe in, what you don’t believe in or how you believe, remember that John F. Kennedy – the first candidate required to explain his faith, told us: "Here on Earth, God's work must truly be our own."