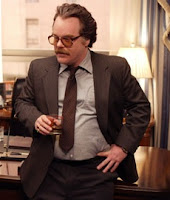 We saw three movies recently and two of them are worth your viewing. Oddly, both star or co-star Philip Seymour Hoffman, and, oddly, we saw both at the same two-screen theater. One is "The Savages" and the other is "Charlie Wilson's War."

We saw one movie we would not usually see, but I have been going to "art houses" and seeing Indie films for so long I needed a fix of explosions and car chases, so by that measure, the Nicolas Cage/Jon Voight "National Treasure" sequel fits the bill, although one critic suggested that in a particularly ludicrous scene Cage and Voight seemed to be competing to see whose career could sink lower.

The movie is basically a live-action cartoon, and maybe I liked it because some of it was shot in D.C. and one scene at my alma mater, the University of Maryland. Let's put it this way: If you can get in at a senior discount, a matinee discount or can sneak in, you could do worse.

Will be gone until the 31st, at least, so if I don't get back in time, Happy New Year to the stalwarts who visit here for their edification, or worse.
Posted by Ira