"A Nose For News"

A guest column today, part of a growing body of curmudgeonry you will start finding hereabouts. This is from Friday's McCook Gazette in Nebraska. Never heard of it till now, but it if prints columns like this, maybe it's worth more attention.


A nose for news

The news doesn't smell as good as it used to.

Fair enough. Except that I'm not talking about political news or stories about taxes, whatever goofiness is shaking up city hall at the moment, the lousy weather or the Cornhuskers' ups and downs. I'm talking about what the news actually smells like.

This is not about the smells of the reporter's job itself: The blend of smoke, wet char and diesel exhaust at a fire scene, the stink of dread and spilled gasoline at a bad traffic crash, the musty odor that lives only in an old courthouse. Every reporter knows them intimately, those smells that are a permanent part of the news.

This smell is different. I got my first whiff of it in the '50s as a kid on a school field trip to the old McCook Daily Gazette building on Norris Avenue. It hit you as you walked in the door -- that ink-and-paper perfume that has been known to set people, often to their own detriment, on a career path.

Kevin Kline's character in the 1985 film "Silverado" remarks that "a good, smelly saloon is my favorite place in the world." In the media business, you didn't have to look very far to find people who felt the same way about a good, smelly newsroom.

Newspaper, television and radio newsrooms had much in common. All had one or more 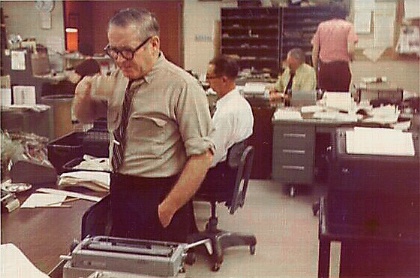 Associated Press or United Press International teletype machines that clattered away nonstop, printing world, national and statewide news. They were temperamental mechanical beasts, noisy and smelling of heavily inked fabric ribbons and hot oil as they hammered out their chronicle of the day's events on long strips of paper.

The wire service news arrived not so much by the story as by the yard. And it smelled very important.

If you've never written for a living, pay close attention here. It's hard, stressful work. In large cities, there is invariably a certain bar where news people go to unwind after work. I have known more than a few reporters who drank well in excess of their share. Some of it no doubt has to do with things they see on the job. Cops, firemen, reporters. They all see the same things, and sometimes it's difficult.

I know a guy who spiraled into alcoholism, then changed careers, after covering a major airline crash. The bodies, still belted to their seats, did it. There are reporters who will never be the same, and a few who got out of the business, after covering the events of 9/11. They'd seen enough.

Which brings us to the denizens of the newsroom.

Local reporters used to bring in their notes and compose their stories on an almost forgotten machine, the typewriter. Scribes toiling over their writing also brought with them two ubiquitous newsroom aromas, cigarette smoke and stale coffee. Plenty of both. The thickness of the smoke and staleness of the coffee were inversely proportional to the time left until deadline, when the paper went to press or the newscast went on the air.

It was exactly what the city room in The Front Page must have smelled like, but without the fedoras with press cards stuck in the hatbands.

At newspapers, all that news had to be converted to type which could be installed on a printing press, covered with ink and pressed against paper. Type metal, consisting mostly of lead, was melted and cast into lines of type one newspaper column wide by the appropriately-named Linotype machine. Most papers had a composing room that held several of the seven foot tall clanking monsters. In those rooms, the news smelled strongly of hot metal.

And, ahhh, the pressroom. The wood-pulp smell of the huge rolls of newsprint. The slightly oily essence of printer's ink. Undertones of machine oil with a hint of ozone. There are people who wish a glass of over-priced wine had this "nose."

That was then. Most of it is gone now, a victim of advancing technology, or political correctness, or changing times.

The pounding, important-smelling wire service machines are gone. Now the stories come in electronically, straight into a computer. Reporters do their writing just like the rest of us, on a word processor. Cigarette smoke in the workplace? Gone. The stale coffee has mostly been replaced by bottled water, but if there's coffee in the newsroom it's the four-dollar-a-cup kind, too expensive to let go cold and stale.

Metal type and the Linotype machines with their hot-lead smell? Gone. The type you're reading right now was set, and the page composed photographically, by a computer. Gutenberg's revolutionary movable type, an invention that changed the world forever, now rendered irrelevant.

In the pressroom, newsprint still smells the same. The old, oily printer's ink -- the kind that used to smudge off the page and onto your hands as you read your newspaper? Gone. In its place, a cleaner and much more environmentally friendly soy product that doesn't smell at all like ink.

Now, the places where the news is collected and packaged for your consumption smell more like a bank or a real estate office.

So that leaves the political news or stories about taxes, whatever goofiness is shaking up city hall at the moment, the lousy weather or the Cornhuskers' ups and downs.

Maybe you're right. Maybe the news really does stink.