OK, I was wrong about Jackie Garcia shooting Sean Taylor, but it still doesn’t add up.

Dana Perino, the Baghdad Bob of the Bush administration, is a moral relativist, the sobriquet right-wingers always hang around the neck of free-thinking liberals. I say that because she thinks the U.S. Congress, whose least reputable member has more integrity than Perino has natural blonde hair, is equivalent to the Iraqi parliament. She also thinks that somehow the Bush Reich bestows a privilege on journalists by allowing them to cover the president.

On Thursday, when answering a question about Sen. Patrick Leahy, D-Vt., trying to get more information from the White House about the firing of attorneys, this arrogant Junior League mistress of malevolence said:

MS. PERINO: They only have six legislative days left in the session. Their focus should be on funding the troops, making sure the intelligence gap remains firmly closed, and by passing a budget, which is something that our country -- our democracy should be able to do. They complain about Iraq; the Iraqis were able to pass a budget. It's almost completed. Ours is nowhere near completed.
...
Q Are you drawing a negative comparison between the United States Congress and the Iraqi National Congress?

MS. PERINO: No, I'm providing you a comparison that the Iraqi Congress -- parliament is accused of not being able to get anything done. And true, they
have got a lot of work ahead of them. They've got big issues to deal with. One of them is dealing with the budget, and how they are going to distribute the revenues across the different provinces. And they have to overcome a lot of sectarian issues. And they are moving forward. They have been able to do that. Our country, after 200 years of democracy -- they're not even able to get appropriations bills to the President; I think that we have signed one. And so there's a lot of issues that have to get done. Think about it -- they have six legislative days left in the session, and all of this work is going to be left undone."

This is an example where the White House press needs to stand up and scream -- cutting off her attempts to call on someone else – and ask the following questions:

1) When has Congress ever passed a budget on time, including during Republican control?

3) Have you ever heard of a continuing resolution?

4) Isn't the partisan give-and-take between the parties in Congress precisely how a 230-year-old democracy should make policy? Or only when you are winning, you sleazy bimbo?

5) Which would you rather have passing laws on your behalf -- the U.S. Congress or the Iraqi Parliament?

6) Oh yeah, is this a democracy, Dana, or a republic, in which citizens delegate their authority to Congress to act on their behalf -- not on yours?

On Friday, she engaged in the following colloquy with Helen Thomas, who has been in the press room nine years longer than Perino has been alive:

Q Does the President want no troops out from on his watch? I'm talking about all the troops.

MS. PERINO: Well, 5,700 troops will be home by the end of the year, so that is some troops coming home. The President said that troop levels are going to be made by commanders on the ground, and that we're going to have to talk about --

Q Why should it be? Why can't the American people have a say?

MS. PERINO: -- return on success. The American people have had a say. They elected a President who is their Commander-in-Chief and is making decisions based on what his commanders on the ground are telling him.

Q And you think that was the vote of the American people?

MS. PERINO: They elected a Commander-in-Chief, and the President is bringing home 5,700 troops, based on the recommendations of his commanders on the ground and based on return on success. Hopefully in the future we can bring home more, but it's going to depend on what General Petraeus reports and remember he will come back in March.

Q Why should we depend on him?

MS. PERINO: Because he is the commander on the ground, Helen. He's the one who is making sure that the situation is moving --

Q You mean how many more people we kill?

MS. PERINO: Helen, I find it really unfortunate that you use your front row position, bestowed upon you by your colleagues, to make such statements. This is a -- it is an honor and a privilege to be in the briefing room, and to suggest that we, at the , are killing innocent people is just absurd and very offensive.

Q Do you know how many we have since the start of this war?

MS. PERINO: How many -- we are going after the enemy, Helen. To the extent that any innocent Iraqis have been killed, we have expressed regret for it.

Q Oh, regret. It doesn't bring back a life.

MS. PERINO: Helen, we are in a war zone, and our military works extremely hard to make sure that everyone has the opportunity for liberty and freedom and democracy, and that is exactly what they are doing.

I'm going to move on.

The fact of the matter is that Helen Thomas was bounced from the front row of the briefing room by Perino’s predecessors and made no complaint. Her colleagues and competitors found it so dishonorable that the White House Correspondents Association petitioned to move her back. Which is why Perino, whose career in journalism is limited to local television in the nation’s 82nd largest market, was saying if it were up to her, Thomas would have a front row seat at . 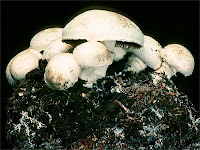 Perino, like so many others in this administration, has a distorted view of how things should work in . She actually thinks it is an “honor and a privilege to be in the briefing room?” Having been there, I can say it is an honor and privilege to be assigned there by your boss, but actually being there is like being a mushroom – kept in the dark and covered in shit.

Ignore Everything I Have Ever Said

I have agreed to start another gig in D.C. journalism in the next few weeks. While I intend to continue this blog, prudence and responsibility will require me to stifle any further partisanship.