This year’s baseball feel-good story should be the Colorado Rockies – a bad-to-middling team throughout most of its 15-year existence playing out of the limelight of the Eastern media. They can’t be ignored now, having reached the World Series following an unprecedented late-season run of 21 victories in 22 games.

They will play for the “world championship” against either the hated Boston Red Sox or a Cleveland team with the unfortunate moniker of Indians and a logo even worse. I really want to root for the Rockies, but I can’t.

I don’t care that they play in a stadium named after Adolph Coors or that Colorado is home of the most dangerous organization in America, “Focus on the Family.” My objection is that the organization's CEO, general manager and field manager have put together a team based not on tactics like the sacrifice bunt but on the sacrifice of Jesus
This team, exposed by USA . 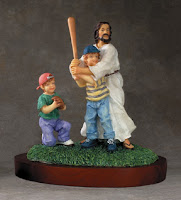 Today last year as a fount of evangelism, does not permit adult magazines in the clubhouse, music with obscene words or players who do not live up to certain moral standards. (Notwithstanding the CEO’s conviction of driving while impaired in 2003 when the Rockies finished 26 games out of first place and just before he happened to find Jesus.) Group prayer is strongly encouraged, and it may have worked in that the team that prays together triple-plays together. 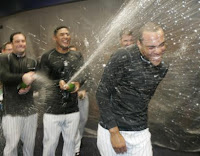 I’ve got no problem with what athletes or anyone else believe, even when they act in the public sphere, so long as government is not involved in promoting religion and I am not required or pressured to go along. It’s just that usually the other team also believes in God, and, most probably, Jesus, and I really think both of Them have other things on Their minds. Like wondering why there are no African-American players on Their favorite team.

I do have a problem, as a sports fan, with athletes and teams attributing their success to a higher power. Last year, when they were just starting to be good, General Manager Dan O’Dowd said, “You look at some of the moves we made and didn't make. You look at some of the games we're winning. Those aren't just a coincidence. God has definitely had a hand in this." Team CEO Charlie Montfort said, “I believe God sends signs, and we're seeing those." I would prefer to believe he merely meant that He is using binoculars from the bleachers to relay the opposing catcher’s signs to the Rockies batters. But that isn’t the truth.

The Truth is that superior athletes work hard, play together and get a little luck. But isn’t luck just a manifestation of a higher power at work? You could believe that, but statistics tell another story.

Baseball is the perfect game because it is built on numbers and long, very long, term trends in which today’s hit that falls just inside the foul line is tomorrow’s homerun ball brought back into the park by the wind for an easy out. The umpire whose blown call put the Rockies into the playoffs will someday make a call that screws them. A daily boxscore is as perfect as a corporate balance sheet; every pitch has a result and when you add them up, the positives for each team that night equal the negatives for the other team. Everything in baseball evens out. Talent rises to the top, and incompetence falls to the bottom.

To me, baseball is a religion with its own rituals, beliefs and icons, and the God who controls things is the God who gave us balance. And the one who sent Rebecca to the well with a pitcher.
Posted by Ira