Having gotten to know George Herbert Walker Bush fairly well when I was a reporter, mine was part of the conventional wisdom that he is a gentleman, eminently qualified for a life in public affairs and, in short, a terrific next-door-neighbor type of guy of manners, charm and wit. 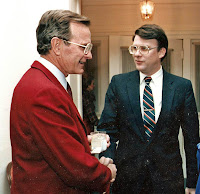 When he tried too hard to be a “regular guy” it didn’t quite work – ordering “a splash more” coffee during a campaign stop in New Hampshire or boasting after a debate in 1984 with Democratic vice presidential nominee Geraldine Ferraro that “we kicked a little ass last night.”

The latter was a remark he thought was made in private to a group of longshoremen, but it was picked up by a television microphone. He laughed it off later saying, “that’s the way we talk at home.”

My opinion of George the Elder has shifted 180 degrees over time simply because he sired and raised the abomination now representing America around the world and doing his best to ensure I will live to see its demise.

After visiting Iraq, where the military success is so great he had to sneak in to get there safely, the Abomination was greeted at a meeting of world leaders by the Australian deputy prime minister, who politely asked how the trip to the war zone had gone.

Replied the Leader of the Free World: “We’re kicking ass.”

Apart from the fact it must have been some other war his bootlicking generals told him about, is this any way to conduct diplomacy in a world where we can count our friends on the middle fingers of this mutant yutz?

I would rather we had 100 misdemeanant Toms, Dicks and Larrys in the U.S. Senate than have had a single narrow-minded narrow-stanced Bush in the White House.
Posted by Ira