The Surly Bonds of Earth

Anabolic steroids are now illegal in baseball, but they weren’t when Bonds began bulking up at age 35 and, in defiance of natural law, got bigger and stronger when every one else's skills were starting to deteriorate.

Bonds, as most know, is on the verge of breaking the most hallowed record in all of American sports – the lifetime number of home runs. According to some testimony, Bonds got mad in 1998 that the single-season home run mark that lasted 34 years had been breached by Mark McGwire. McGwire refused to tell Congress whether he used unnatural substances, thereby confirming that his record was suspect.

So Bonds, who after his first 10 years in baseball already was a lock for election to the Hall of Fame for his prodigious slugging, his speed on the bases and his defense, decided no white man was going to steal his thunder. And within three years, he busted McGwire's record easily. The Steroid Era of baseball was in full syringe.

Cal Ripken, who was inducted into the Hall of Fame today, was a very good ballplayer, and his two Most Valuable Player awards, while not comparable to Bonds’ seven such awards, validate his credentials, as did his 432 home runs, 3,184 hits and 19 All-Star Game appearances

Oh, did I mention that Ripken played in 2,632 consecutive games – an unfathomable achievement of will and talent -- and came to represent everything right about baseball and America?

They both came by their talents by dint of fathers who were better than most at baseball. Bonds’ dad was Bobby Bonds, a talented hitter and base stealer, and Ripken’s was Cal Ripken Sr., a minor league player and Major League coach, manager and teacher.

Whereas the Ripkens were quietly dedicated to the ins and outs of the game, the Barry Bonds is flashy, loud, surly and contemptuous of the journalists who report on his exploits and of the fans who pay his salary.

The contrast could not be ignored on a day when Ripken went into the Hall of Fame and Bonds – a hateful, dishonest, selfish and mean misanthropic malcontent – had at least the good grace not to steal the spotlight, by hitting home run No. 755.

Some baseball fans say using steroids wasn’t illegal in the ‘90s and early 2000s and, besides, fans love to see home runs. It used to be said “home run hitters drive Cadillacs and singles hitters drive Fords.” That was back in the day when even the big sluggers were paid just enough to buy only one Cadillac.

This is true, and perhaps some pitchers were juiced more than the Florida citrus council headquarters and made it harder for hitters to hammer home runs. But steroids in sports are bad, period, for several reasons: 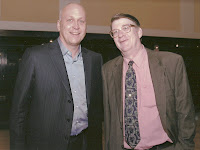 I am an iconoclast and believe in no one except myself and family. And although Cal Ripken is probably a closet Republican, I can’t think of anything else negative about the man and, so, he remains as close to a sports hero as I have had since Roy Sievers retired.
Posted by Ira