"Mr. Gorbachev, Tear Down This Wall" 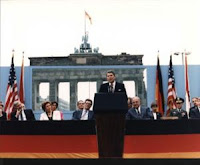 In my time as a reporter, I witnessed hundreds of events, most of them interesting, few really earth-shattering. One stands out now in retrospect, and it happened 20 years ago on this date.
I was traveling with President Reagan on his trip to what is now known at the G-8 summit, in 1987 held in Venice. On the way back, he stopped in West Berlin to show solidarity with West Germany and, despite what people remember about his main speech, it actually was intended to tone down some of his decades of anti-Soviet saber-rattling. (The Soviet Union, now Russia, was not a member of the group of Western industrial powers plus Japan that was then the G-7.)
Anyway, on the flight to Berlin, the White House staff, as usual, handed out the president's prepared remarks. I read it and, being a fan of political rhetoric, had no trouble whatsoever finding the lead.
This was in the early days of laptops and remote transmissions, so as soon as we landed and took a motorcade through West Berlin, zigzagging around the graffiti-marked wall, I hit the speech site, ran for the elevated platform set aside for press and TV cameras and slapped huge rubber cups on the mouthpiece and earpiece of a telephone and hit "send." My story went back to Washington, and when Reagan enunciated the words that were the lead of the story, they were even more powerful than they were on paper.
The Wall didn't come down until years later, and, in my opinion, Reagan had nothing to do with it. But you have to hand it to him. Reagan knew how to give a speech and how to take credit for stuff.
Here is the story I wrote, with links to the printed text of the speech and the audio version of it.

Reagan stood near the wall he called a ''scar'' and made an impassioned appeal sprinkled with German for East-West cooperation to reunite the divided city. Tens of thousands of people waving West German and American flags crowded into the boulevard to hear Reagan declare: ''Es gibt nur ein

Reagan's visit was a symbolic one ostensibly to help

Berlin celebrate its 750th anniversary but also provided a chance to prod Gorbachev into proving his reform policies of openness are more than token gesture.

Standing on a stage a mere 25 feet in front of the wall where it blocks Western access to the landmark Brandenburg Gate on the east side and in an address that could be heard by radio and television listeners on the communist side of the wall, Reagan dared Gorbachev to prove his intentions.

''There is one sign the Soviets can make that would be unmistakable, that would advance dramatically the cause of freedom and peace,'' he said.

''Mr. Gorbachev, open this gate. Mr. Gorbachev, tear down this wall,'' he shouted to the crowd, which responded with loud cheering, prolonged applause and fists raised in solidarity.

During his 26-minute address, which was not as hard-line against the Soviets as previous remarks, Reagan was interrupted by applause 19 times from a crowd delighted by his forays into German.

He only added one paragraph to his prepared remarks -- a reference to anti-American demonstrations that included a rally by 20,000 Thursday night. About 1,000 of the protesters, most of them masked youths, broke off from the main crowd, rampaging through parts of West

No demonstrators were visible today and 10,000 police had been mobilized to protect them. Reagan's 1982 visit to Berlin also sparked wild protests.

''I have read and I have been questioned about certain demonstrations about my coming,'' he said. ''I wonder if they had asked themselves if they had
the government they seek, would they ever be able to do what they are doing again.''

When Reagan began speaking, a machine-gun-wielding East German guard patrolling atop the Brandenburg Gate, an 1800s victory monument of six 65-foot doric columns towering above the squat wall went inside a bunker. He re-emerged when the address ended.

Through the columns, East German soldiers could be seen patrolling an empty plaza but about 200 yards from the wall while hundreds of East Germans were gathered behind barricades.

Reagan spoke not far from the spot where hundreds of East Germans rioted earlier this week when they were prevented from hearing music from a rock concert on the Western side of the wall.

On the Western side of the wall, behind Reagan's blue, flag-studded speaker's platform, someone had freshly spray painted: ''Welcome Reagan.'' On Thursday evening, a graffiti message on the same spot had read: ''Reagan Go Home.''

The wall was built in 1961 to stem the tide of East Germans fleeing to the West, and Reagan's use of German recalled the 1963 historic visit to the city when President Kennedy declared, ''Ich bin ein Berliner.''

Reagan and his wife, Nancy, were ebullient as they arrived to a 21-howitzer salute officially starting their 4 -hour Berlin visit en route home to Washington from Venice.

However, their mood became more solemn as they viewed the wall and an East German guard tower from behind bulletproof glass erected on the balcony of the Reichstag, or former German Parliament. At one point, Mrs. Reagan put her arm around her husband and patted his back. As the Reagans viewed the wall, communist guards peered back at them through binoculars.

Asked later how he felt about viewing the wall, he said: ''The way I've always felt. It's the third time I've seen it. It's an ugly scar.''

Reagan's visit also was designed to commemorate the 40th anniversary of the Marshall Plan that helped rebuild war-ravaged Western Europe. He was to stop in Bonn for a ceremonial meeting before the final leg of his trip back to Washington.

En route to Berlin, White House spokesman Marlin Fitzwater told reporters the president intends to resubmit to Congress a proposal to sell 1,600 anti-tank missiles to Saudi Arabia because the sale is a ''high priority to the president.'' Reagan announced a temporary withdrawal of the package Thursay as the proposal faced almost certain defeat in Congress.

The Reagans traveled in a 40-vehicle motorcade from the Tempelhof Airport, focus point of the 1948 Berlin airlift, to the Schloss Bellevue Palace for a visit with President Richard Von Weizsacker and his wife. As photographers snapped pictures, Reagan grinned broadly and said he was pleased with Prime Minister Margaret Thatcher's election to a third-term in Thursday's British elections and planned to telephone his congratulations later in the day.

The speech anticipated anti-American demonstrations. Reagan invited all who protested deployment of Pershing missiles in Europe and ''those who protest today'' to note it is ''because we remained strong'' that the Soviets came back to the bargaining table and the superpowers are near an agreement to remove medium-range missiles from Europe.