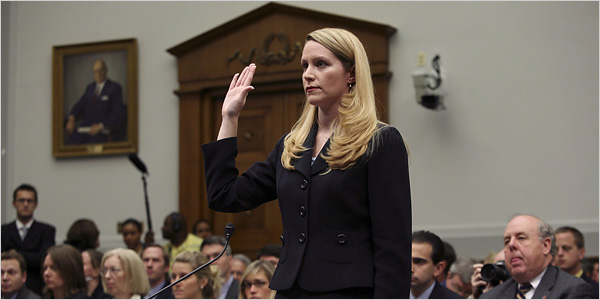 The Watergate scandal that brought down a president was, at root, the extension of fraternity and student government politics as practiced by young USC grads working for President Nixon. In their collegiate days, they were known proudly as “ratfuckers.”

Yesterday, a young inexperienced political partisan whose judgment was as deficient as her legal training, testified before the House Judiciary Committee. She was the ratfuckee.

Put in a position for which she was no more qualified than a student government president, which she was, Monica Goodling put the onus for the Justice Department scandal on former Deputy Attorney General Paul McNulty and Attorney General Alberto Gonzales. At least she said they were lying.

Now, it is easy to make fun of the blonde, squeaky Ms. Goodling, who by all other accounts was a terror to work with or for. Yesterday, she was reasonably calm and responsive to hostile questioning.

And despite her deeds as a willing executioner of Civil Service regulations regarding nonpartisanship in hiring for certain jobs, she at least had the grace to do something no one else in this administration has done yet. She apologized, kind of.

“I believe I crossed the lines,” she said.

Well, she meant to cross the line because that is why she was hired. But at least Ms. Goodling, caught with her hands in the cookie jar, offered the naif’s excuse: “I didn’t mean to.”

Of course honesty is easier when you have been given immunity from prosecution. And if the world is compassionate and fair, maybe in 20 years Ms. Goodling can be hired somewhere as a public defender.
Posted by Ira