The details of who, what, where, when and why at Virginia Tech are still to be learned, and at the risk of jumping the gun, let’s think about guns. 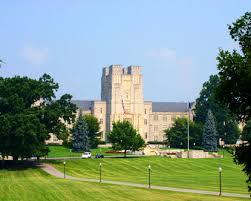 Before I have even finished this small essay, I am sure the National Rifle Association is out there saying that if everyone on campus had been allowed to carry guns, this massacre would not have happened.

Never mind. They are allowed.

The commonwealth of Virginia has some of the most lax gun laws in the country, and this is but one of the results. The other results are found in the murders committed in East Coast cities by guns imported from Virginia, whose junior senator packs a pistol. The NRA, itself, is located in the commonwealth.

Amid the high-rises, apartments and suburban sprawl that is home to millions of people just outside Washington, D.C., you can walk into a bar, a movie theater or a church with a gun on your hip. You cannot be arrested. You do not need a license. You simply may not carry a concealed weapon, but you can prance around the cradle of the Confederacy like Bonnie and Clyde.

You can bet that this latest April (near-Hitler’s-birthday) act of terrorism will be fodder for Second Amendment arguments, and if the pro-death gun lobby gins itself up, it will be more than the families of dead Tech students who start voting against the gun ho’s in Congress and the White House.

Let’s bring this mega-issue down to the micro-level. A study came out today confirming that in the states with the highest level of gun ownership, the suicide rate is almost twice as high as in the states with the lowest level; each group having about the same population. Yes, the gun yahoos will say that only 5 percent of suicide attempts involve guns. But since more than 90 percent of the gun attempts are fatal, half of all suicides in the United States are by firearm.

We already know that the rate of children being killed accidentally by guns is directly proportionate with the availability of guns in the home.

If we want to stop random killing in this country, we can either impose a Gestapo-like security regime like we have at airports, or we can institutionalize, Soviet-style, weird people on grounds they are mental cases. Or we could throw out the rest of the Asian graduate students who were not thrown out after 9/11.

Or we could get rid of guns.

And for the same reason we ought to take out Iran’s nuclear capability. Because history has proven time and again that if you have access to a weapon of any kinds, it will be used.
Posted by Ira