In my salad days, I sat through maybe hundreds of congressional hearings. Then I entered my vegetable days.

What you hear sometimes is just jaw-dropping. I was reminded of that today while watching on TV a House investigative committee looking into alleged improprieties (profiteering) in the Iraq reconstruction.

Rep. Betty McCollum, D-Minn., a former high school social studies teacher, naturally, said the following: "I want to say this in terms people will understand. We had a guardian at litem relationship" with the Iraqi populace.

Let me suggest the lady is a tad non compos mentis if she thinks she is speaking in terms the people will understand.

It also reminded me of the complaint by some analyst during the Falkland Island war between England and Argentina that a settlement was impossible because "the two parties just aren't speaking the same language."

Later that night, I attended the first in a series of black-tie press/politician dinners. I used to go to them all, but that was when I was a contendah. Until last year, I hadn't gone in 15 years or so. Of course, no one invited me, either. But as a former board member of this particular dinner, I inquired as to why I didn't get invitations, and I was told I should have.

So for two years now, I have spent enough money to feed a Bangladeshi neighborhood to see and be seen. It is my night out.

This year I was at a table of old farts who used to be somebody, including the ex-president of my alma mater and his chatty wife. But in front of us was a table with both Miss America and Daryl Hannah. Daryl Hannah, I can report, is very tall -- perhaps close to six-feet tall -- in her flippers.

I only saw the back of Miss America. It said, "Made in the Dominican Republic."

Way in the front with Chris "Jesus Christ Superstar" Matthews was Sam Waterston. Last year, the best the dinner could come up with was Joey Pants, otherwise known as Joe Pantaliano -- or Ralphie from the Sopranos. 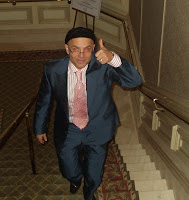 This year's dinner -- run by a group that used to be women-only because the guys wouldn't let the girls into the big press club -- honored Helen Thomas, one of my former colleagues and favorite people and still a friend. Unfortunately, the woman they honored last year died.

The event featured, if you can call it that, bad humor by House Minority Leader John Boehner and Ted Kennedy. The difference is that Kennedy can afford the better gag writers.

Aside from a decent filet mignon, the best stuff was from emcee Bob Schieffer of CBS News, who wondered if the Democrats put the "can" back in "Republican" the Republicans would put the "ic" back in "Democratic."

The only reason for going was for people to know I remain alive, which in the p.r. business is always good. And also to see my son, who now is a member of the board of this organization and whose guest was a new member of Congress whose first name is Gabrielle. She represents Tucson, is only a couple of years older than he is and is dating an astronaut. Would have loved to have heard THAT conversation. One of his grandmothers would have been proud of his official "date," as Rep. Gabrielle Gifford is apparently Jewish.

But his wife would not.
Posted by Ira