I don’t care if Peyton Manning deserved to win “the big one.” I don’t care that my Chicago Bears lost the Super Bowl because someone inexplicably gave Rex Grossman a jockstrap and a helmet. I don’t care that Indianapolis finally made it all the way.

I don’t care at all about the Super Bowl because the outcome was pre-ordained. It had nothing to do with a superior Indianapolis defense, outstanding coaching and the Bears inability to control the ball. It all had to do with God.

How do I know this? I know this because the owner of the Colts, Jim Irsay, said so after the game while receiving the trophy. I was listening on the car radio after watching the game at a friend’s house, so I wasn’t able to take notes. 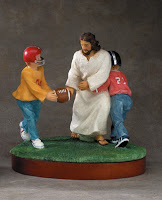 It must also have been God who condemned the Chicago Bears to lose, despite their having worked like hell since last July to get to the ultimate game. Too bad, Chicago. God hates you. Didn’t the Colts work like hell, too? Oh, no says winning coach Tony Dungy. “We did it the Lord’s way.”

Since God got involved and determined that the Colts would win, I wonder if he also set the betting line, determined which companies would get more sales from their expensive ads and has plans for Kevin Federline.

Former Senator and poet Eugene McCarthy once said that running for president is like being a football coach. “You have be smart enough to do it but dumb enough to want to.”
The single-mindedness and narrow-mindedness of most coaches render them incapable of functioning in the rest of society, but if they give credit to God in mindless ways, then they become gods themselves.

The reality is that the coaches and the players know damn well how lucky they are when they win the big game. But they aren’t allowed to say so; glory goes not to their skill and hard work, but to God.

Isn’t it really glorious that God got to spend His day of rest playing his version of a video game and laughing at his human creations who thought the Super Bowl was actually competitive? After all, He had a tough week, what with creating tornadoes in Florida, mass murder bombings in a Baghdad market and floods in Indonesia.
Posted by Ira