After a week of watching TV news more than is healthy, I have come to a number of tentative conclusions about the 2008 presidential race, and I agree with whoever said on one of the Sunday morning talk shows that people are, indeed, paying attention this early. Popularity polls don’t mean anything yet, but the cut of various candidates’ jibs is coming into view.

So, first, I have to ask what’s the big deal about Mitt Romney being Mormon? Sure, it’s a strange religion, a cult even, that subscribes to bizarre beliefs in the eyes of most other Christians. Anyone who knows me knows how I feel about religion and public expressions of it, but we already have a president who believes in imposing his cultish beliefs on civil law more than any Mormon president ever would.

Second, I have decided I cannot and will not support Hillary Clinton for the Democratic nomination. Not that I would vote for any Republican against her, mind you. It isn’t so much about policy differences, nor about her propensity to play every angle to remain politically viable, nor about her being a woman nor about her being from New York.

I can’t stand the woman’s voice. And that, is exactly what I think most people subconsciously use as a guide for whom to vote. Whom do you want to have to listen to for the next four or eight years? I believe it is essentially why people chose Bush over Kerry and why Bush came so close to defeating Gore. He sounds normal.

I am going to have a problem with John Edwards for much the same reason, though he seems capable of modulating his southern accent and a penchant for talking down to us. Joe Biden appeals to me, both politically and vocally, but he does talk so much he winds up distracted from the main task by having to apologize. Chris Dodd is an old-world, Kennedy-style, Homeric stentor.

Whom does that leave? Barack Obama and Bill Richardson. Everyone is talking about Obama, and I think I like him enough to support or even work for his election. His voice is so good that when I was listening to TV from another room, I went back to see who this marvelously erudite, easy-going, (yes, “articulate”) voice belonged to. It was Obama. Richardson also speaks common sense in a down-to-earth style as your neighbor might.

Who are the most qualified candidates, in terms of experience, judgment, leadership and charisma? Biden and Richardson. Either would make a terrific president but chances are not good for people from states with eight electoral votes combined. 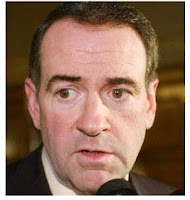 On the Republican side, Rudy Giuliani will be soon dismissed as a common scold with an accent that has never gone far in national politics. Romney speaks easily and well and is the best-looking candidate by far. But watch for a guy you have never heard of – Mike Huckabee, another former governor from Hope, Arkansas. He is a dangerous right-wing evangelical, but he sounds good.

I guess it’s a good thing I wasn’t around to endorse candidates in the 1860 election, because I am sure I would have gone with the guy with the better debating style and better voice – Stephen Douglas.

For as long as I have been alive, whenever it snows in Washington, the federal government announces whether offices will be closed, whether there will be a two-hour delay or whether employees may come in late without having to use their leave. The latter category was known widely as “a liberal leave policy.” This administration, as do dictatorships around the world, has changed the language. Today, with snow and ice on the ground, there is no longer a “liberal leave policy.”

Another difference between class and trash? At the Academy Awards, that blivet Jennifer Hudson first thanked God for her winning a golden calf … I mean, Oscar. “Look what God can do. I didn't think I was going to win.” Poor, little Abigail Breslin, Adriana Barraza, Rinko Kikuchi and Cate Blanchett. They must have pissed off God somehow.

On the other hand, Forest Whitaker, who also thanked God, noted that He looks over everyone, the losers in his category and presumably all else. Whitaker also noted he will take the honor to the end of his life and beyond. I feel sorry for Peter O’Toole, who seems to have had his last chance to get an Oscar in this life. He must wonder who will rid him of those troublesome Academy voters.
Posted by Ira